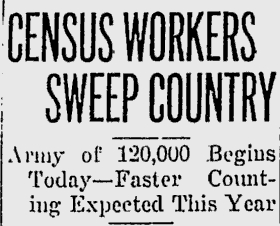 Washington, April 2 (AP) – An army of 120,000 census enumerators enters energetically today upon the gigantic task of counting the American population.

Ringing front doorbells, tapping brass knockers along the hallways of city apartment houses, driving through the gates of farmsteads, searching out obscure families in the mountains and on the plains, they embarked upon what is intended to be the most complete tabulation of the American people and their economic conditions ever accomplished.

Although the 1930 census chore is the biggest ever attempted by the census bureau, modern accounting machinery will make it a speedy job. For months the bureau has been making its preparations.
The census taken 10 years ago showed a total population of 105,710,620 and the intervening decade is estimated to have brought an increase of approximately 17,000,000.

In Director Steuart’s office is a highly complicated mechanism known as a census clock, which keeps tabs on estimated population changes as the minutes pass and it is now standing close to 122,000,000. Mr. Steuart expects a merry race among his workers to see what cities and other geographical sections can get their reports in first.

Why They Read the Banns…