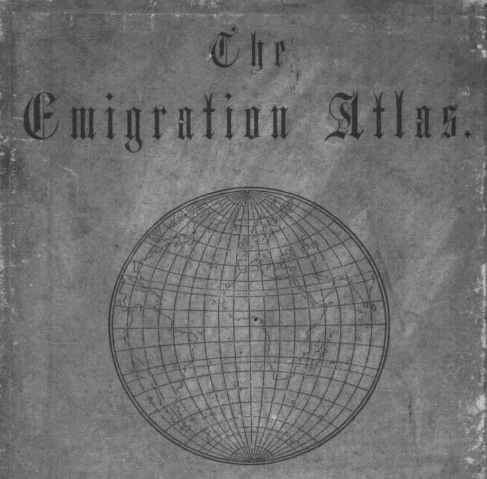 While exploring the new UK map collection on Ancestry, I stumbled upon their Emigration Atlas 1852 which is an image-only item.

This thin volume provided basic details for people looking to emigrate from Great Britain. It includes maps of Canada, the United States, Mexico, South America, the Cape Colony and Fort Natal, Australia, Tasmania, and New Zealand. In addition, there are write-ups for each destination, giving a short description of the country, cost of passage, journey in miles and time, types of workers needed at each destination, wages, cost of living, and other particulars.

While most of my English ancestors came to Canada somewhat later than 1852, I’ve researched several other families who came to Canada in the mid 1800’s and I found the description of the North American Colony of Canada particularly fascinating. It is interesting to note that Canada ended around what is now the Ontario/Manitoba border:

Canada is a large country situated on the eastern side of the North American continent, and extending along the shores of the great Lakes of Superior, Huron, Erie, and Ontario, and the River St. Lawrence. Its total area is 350,000 square miles. The eastern portion of the province, or Lower Canada, occupies both sides of the St. Lawrence, and adjoins the United States on the south : it is distinguished by great extremes of climate, having a long and sever winter, and a very hot summer. Western or Upper Canada embraces a peninsular region enclosed between the three lakes of Huron, Erie, and Ontario, which has a mild and temperate climate. Both parts of the province are very fertile.

The natural wealth of Canada consists in its forests. When cleared of wood, the ground is admirably suited for agriculture.

The principal towns in Lower Canada are Quebec and Montreal; in Upper Canada, Kingston, Toronto and Hamilton. Quebec is the seat of government for the how province.

Route.~The usual mode of reaching Canada from Britain is by sailing-vessels, which leave London, Liverpool, Greenock, and other ports, and proceed direct through the Gulf of St. Lawrence, and up the river of that name to Quebec. Sometimes, however, the passage is made to Halifax (in Nova Scotia) and thence to the banks of the St. Lawrence; but the direct passage to Quebec is the best for emigrants intending to settle in Canada.

Distance and Length of Passage.~The distance of Quebec from London is 3,500 miles; the further distance thence to Toronto, in Upper Canada is 550 miles. The time occupied by sailing-vessels varies from five to six or seven weeks. Steamboats leave Quebec and Montreal daily for Kingston, Hamilton, and other places in Upper Canada. The journey from Quebec to Hamilton occupies about four days.

The class of labourers most certain of meeting with employment in Canada are farm-labourers, and mechanics of nearly every kind; bricklayers, carpenters and cabinet-makers, mill-writes, painters, plasterers, sawyers, shoe-makers, stone-masons, and other artizans, meet with employment at good wages.