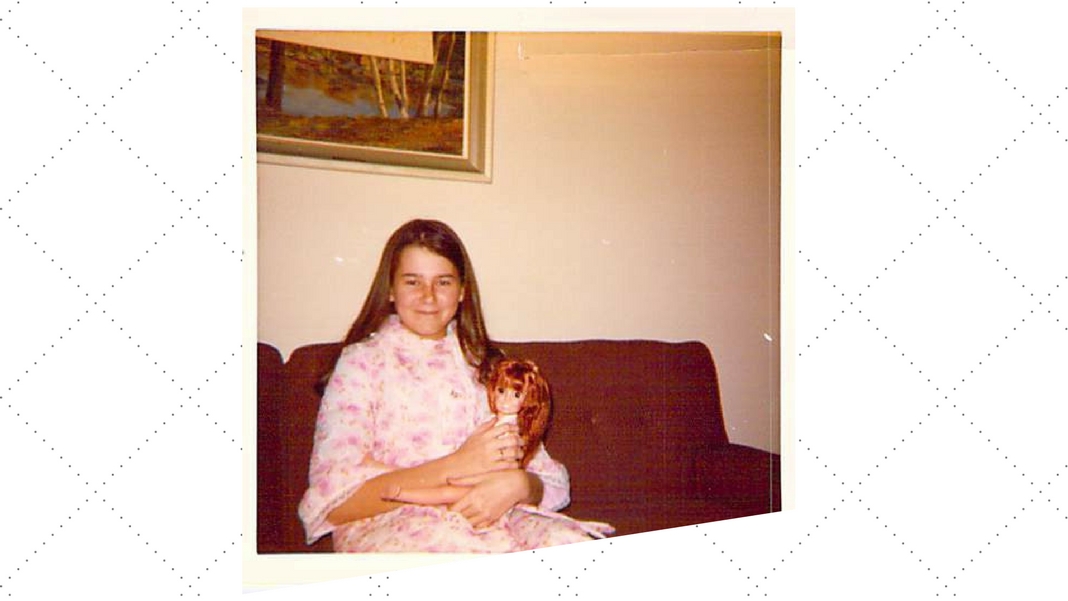 If I had to guess, I would say I was nine years old in this photograph taken at Christmas so the year would be 1969. Cradled in my arms is my new doll, Beautiful Crissy. Although I was a little old for dolls, I remember that I desperately wanted Beautiful Crissy for Christmas that year for some reason. She was a 17″ fashion doll who had hair that could grow. If you pressed a button on her tummy, you could pull on her hair to grow it or if you wanted it shorter again, you could turn a knob on her back. Maybe it was this commercial that enticed me because I’m pretty sure I remember seeing it back in the day.

According to some vintage advertisements I found online, it seems like Crissy was just under $10 which seems to be equivalent to about $60 in today’s terms – quite a bit of money at the time so I guess I must have REALLY wanted it for my parents to have paid that much money! 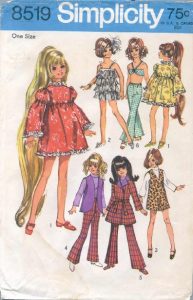 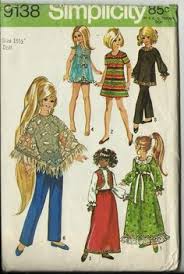 I don’t recall actually playing with Crissy (I probably really was too old for a doll), but I do remember making her many outfits to wear, coached by both my Nana and my Mother, both excellent seamstresses. This was before I learned to use the sewing machine so the clothes would all have been made by hand. I think I had a pattern for the Crissy clothes, maybe from Simplicity. I went searching on the internet and I found these two examples which seem so very, very familiar to me. I’m pretty sure I made her the long skirt and vest from #9138 and I think my first project was the red dress from #8519 because I remember sewing the trimming on the hem and the sleeves. Check out the prices shown on the patterns! One was 75 cents and the other one was 85 cents.

I remember going to the fabric store to look at patterns in the huge pattern books. We almost always bought Simplicity patterns but I also remember Butterick, Vogue and Burda patterns. Once you had chosen your pattern from the big book, you went to the drawers located underneath the book shelf and found your pattern by the four digit number shown in the pattern book. Since these were doll clothes, there was only one size but if you were choosing a pattern for people clothes, there was a different pattern for each size. On the back of the pattern envelope, it would tell you how much fabric was required for the project and if any notions (buttons, zippers, lace, bias tape) were required. Fabric in those pre-metric days was sold in 36″, 45″ and 60″ widths and was purchased by the yard, as were the trims such as lace and braid.

I think I made one of those very 70s style pant suits with pants and vest in #8519 as well, perhaps using scraps of fabric from my own pant suit that my mother made me out of orange double-knit fabric. I remember that I had a matching vest, skirt and pants of the orange and a coordinating patterned seersucker blouse. When Mom made that blouse, it was really difficult to tell the ‘right’ side from the ‘wrong’ side of the fabric and I remember that I arrived home from school one day to find her sitting at the sewing machine with the seam ripper and in a very bad temper, having just sewn a sleeve in wrong side out for the second time.

The other things that come back to me when looking at the photograph of Crissy and me was that awful brown couch we had that was upholstered in some type of indestructible nylon fabric before it was recovered in an equally awful gold and olive green paisley floral pattern. I also remember the painting above the couch, just barely visible. It was of a red canoe, floating in a pond in the autumn woods and was painted by my Aunt Irene. I inherited the painting (or rather rescued it when my parents house was being sold) and it is currently hanging in my recreation room. Finally, I remember that housecoat! It was pink, had ruffles and lace, and was one of the few store bought things I owned at the time so it made a huge impression on me when my father gave it to me that Christmas.