There are many ways to do census entry in RootsMagic. This post is about how I enter mine.

There is a right way, a wrong way and then there is my way.

That’s not to say that other ways are wrong, since really, there is no wrong way, but I’ve found this way works for me. You might prefer your own way, you might find my way works better, or you might just find one nugget in the following tutorial that you can add to your own way.

I chose to create a separate fact type for each Census. Since I have British, Canadian and US entries, I have created fact types for 1841, 1850, 1851, 1860, 1861, etc. While it is possible to create a ‘family’ entry, I use the ‘individual’ facts to record the census because while I like the idea of fact ‘sharing’, I’ve found that it doesn’t translate well in a GEDCOM file. 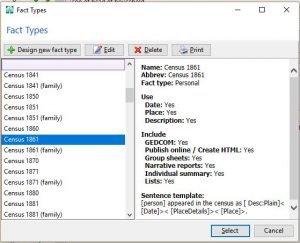 Having a fact for each census year lets me easily see when I missing one and lets me create custom reports such as a list of all people alive in 1861 with no ‘Census 1861’ fact type.

I recently changed my sentence template for the Census fact types to take advantage of the description field while not making it mandatory since many of my entries do not have a description. Now as I’m working on people in my tree, I’m adding the description since I find it helps with my research.

I have only one role, Principal, and my sentence template reads like this:

Where I’ve entered the description, the sentence for this fact now appears as something like:

William Bond appeared in the census as son of head of household on 7 Apr 1861 at 38 Oxford Street in Preston, Lancashire, England.

If I haven’t entered a description, it appears as:

William Bond appeared in the census on 7 Apr 1861 at 38 Oxford Street in Preston, Lancashire, England. 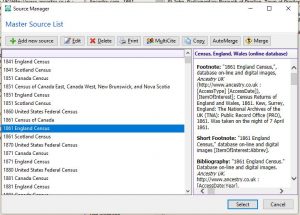 My source templates are also created by census year and also by place and are customized to make entry much faster. I use the same source template to create any source citation for that year and place. My usual source for census records is Ancestry so I’ve added a field where I can simply paste the source information from there. 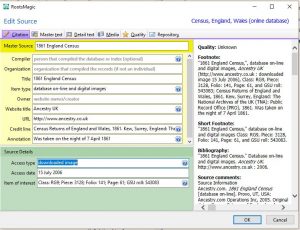 In my source template, I have entered source comments about the census such as what questions the enumerator asked, the rules for recording the information, any designated short forms used, any known problems with the census including missing records, etc. This makes for a good reference that is available right where you need it, right when you need it.

Within the source information, I include the date the census was taken and when entering the fact, this is the date I use, rather than just the year. 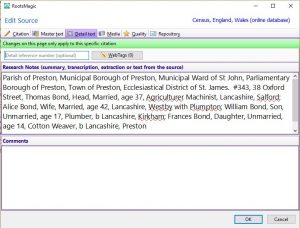 As an easy reference, I transcribe the census entry into the detail text field of the source citation. This too is a great reference later when I’m doing my research and want to check the members of the household quickly.

I can choose to include or exclude this extra detail when printing reports.

How I Enter the Census Fact and Sources

Over the years, I’ve developed a quick entry method to enter a census entry for a whole family in a relatively quick manner.

I start by adding the fact to the head of household. This part takes the longest since everything is entered from scratch. The following steps will walk through entering the 1861 census for my Bond family.

Next I enter the source.

The detail entry for this family reads:

Once the source citation is entered and double checked, I memorize it for later by clicking the memorize button.

To enter the next person on the census, I go to their edit person screen and repeat the fact entry, changing the description appropriately. Then comes the magic of keyboard commands! To add the memorized source to this second person, I simply hold down the ALT key and press S, P and O in succession.

For anyone who is listed as having an occupation, I also add an occupation fact to the person and use the same keyboard shortcuts to add the census source to that fact.

If this entry gives me a birth year and place that I don’t already have, I also enter a fact for birth and use the same keyboard shortcuts to add the census source to that fact. I enter the year only in the date field and preface it with the word ‘about’. This lets me know that it is an approximation based on age. 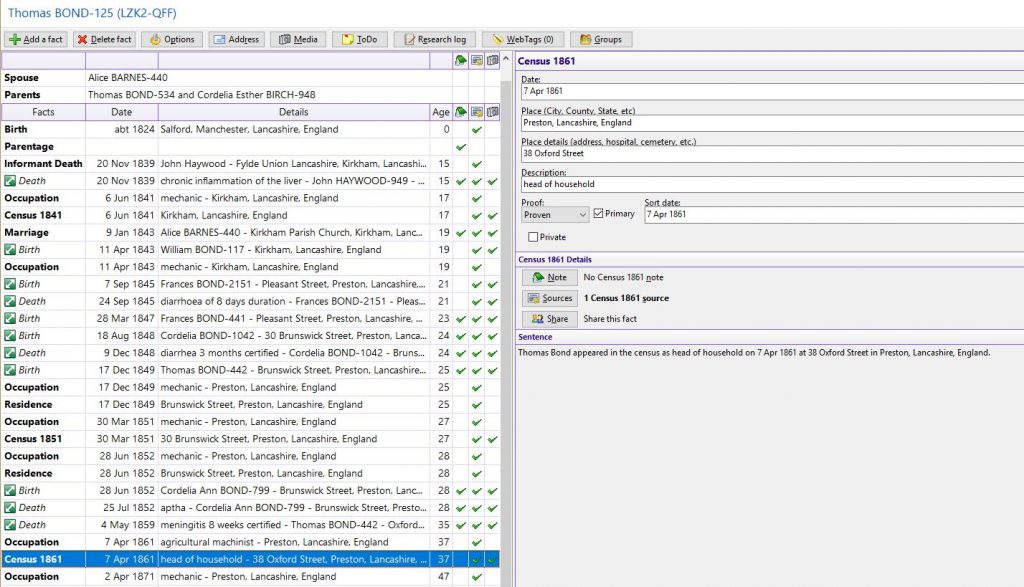 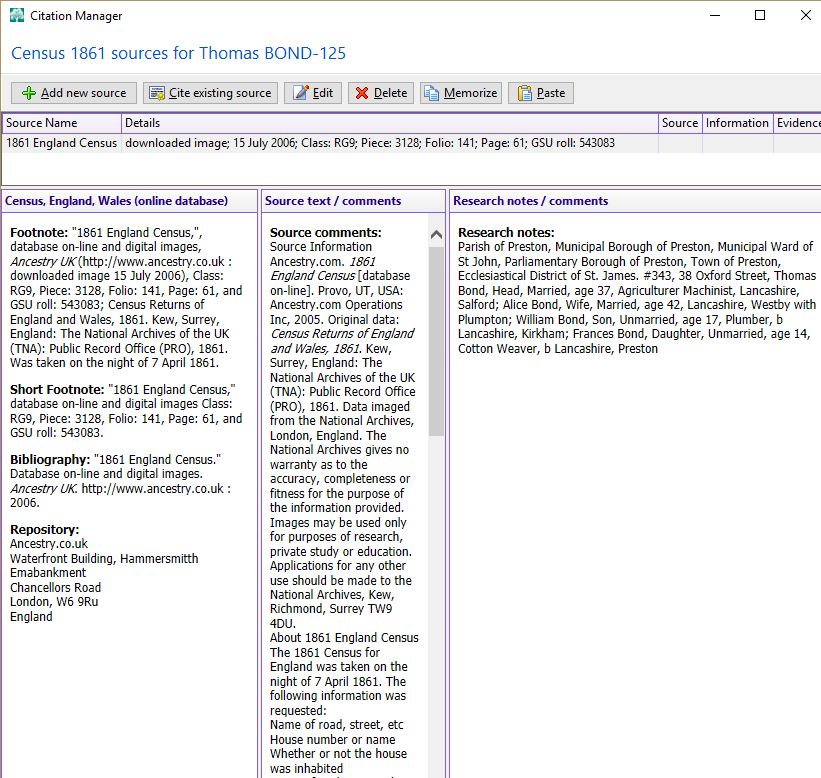 How Do You Do a Census Entry?

If you have your own tried and true way of doing census entries, I’d love to hear it about it in the comments below!