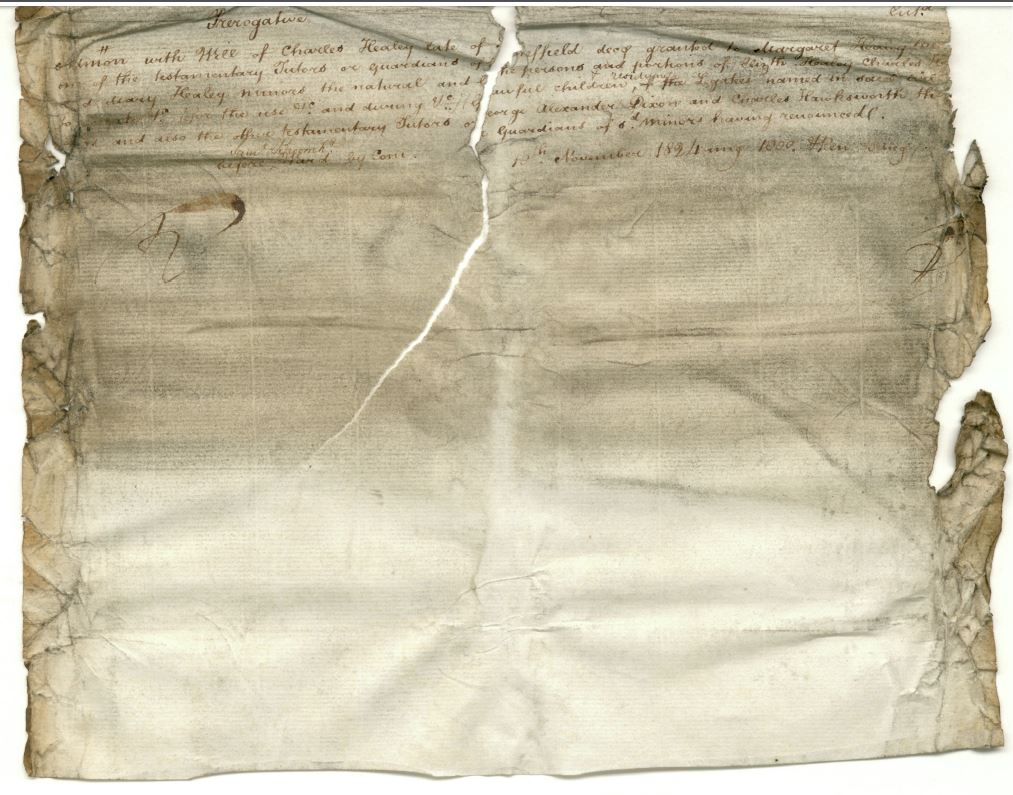 For thirty years, I’ve been stuck behind a very high and seemingly insurmountable brick wall in the fifth generation of my family tree and I’m on a mission to finally break through it! I plan to use every tool in my genealogy toolbox to break down this brick wall. You can follow my progress my selecting ‘Brick Wall Browns’ from the category list on the right to view all of the related blog posts.

In a previous post, I discovered that one of the witnesses to the marriage of my brick wall ancestors George Brown and Ann Healey was a woman named Margaret Healey and I’m hoping that by researching Margaret and her family, I might find out more about Ann Healey. My working hypothesis is that Margaret Healey might have been Ann Healey’s aunt, but I don’t want to get ahead of the evidence.

To summarise what I know about the family of Margaret Healey, I ran a descendant report from RootsMagic and made a few edits. Sources have been omitted for readability, however rest assured that the do appear in my database!

Charles HEALEY married Margaret BAINES on 18 Jan 1815 at Manchester Cathedral in Manchester, Lancashire, England. Margaret BAINES, daughter of Edward BAINES and his wife Jane, was baptised on 2 May 1790 at Manchester Cathedral in Manchester, Lancashire. In 1822 she was an Inn Keeper in her own right at Reindeer Castle Foulds in Sheffield, Yorkshire, England. By the time that she appeared in the census on 6 Jun 1841 at Castle Hill in Sheffield she was working as a seamstress. At the time of the 1851 census she was living at Castle Hill and worked as a house keeper. By 1861, she was living on Lord Street with her daughter Mary Jane Fletcher and family. Margaret died on 28 Sep 1865 at Thomas Street was buried on 1 Oct 1865 at Burngreave Cemetery.

Charles HEALEY and Margaret BAINES had the following known children:

When Charles Healey died in 1823, he left a will and I was able to find an index entry for it showing that the probate records were held at the Borthwick Institute in Yorkshire. I ordered a copy of the documents and they have just arrived. Below is my transcription, excluding the front matter which was damaged and is difficult to read as can be seen in the image of this post. I’ve omitted the line breaks and added some punctuation for readability.

This is the last Will and Testament of me Charles Healey of Sheffield in the County of York Innkeeper whereby I revoke all former Wills and Testamentary Dispositions by me made. First I will and direct that all my just Debts funeral and Testamentary expences be paid by my Executors hereinafter named. I give to my Son Charles my God Watch which I now wear to be delivered to him on his attaining the age of Twenty one years or sooner if the Guardians of my Children hereinafter appointed shall think proper. And also all my Drawing Apparatus at the same time. Also I give to my Brother Harvey the sum of Ten Pounds and a suit of Mourning. Also I give to Mary Brammall my Bar Maid the sum of Five Guineas and a suit of Mourning. Also I give my Friend Mr. John Dixon of Sheffield Solicitor and to each of my Trustees  and Executors hereinafter named a Mourning Ring. And as to the residue and remainder of my Estate and Effect whatsoever and wheresoever (being all personal) I give and bequeath the same unto my Friends George Alexander Dixon of Sheffield aforesaid Refiner and Charles Handsworth of Attercliffe near Sheffield aforesaid Silver Smith whom I appoint joint executors of this my Will. Upon Trust that they or the Survivor of them his Executors or Administrators shall and do with all convenient speed called get in and receive such part thereof as shall consist of Money or Securities for Money and shall and do convert into Money such part thereof as shall not consist of Money or Securities for Money and lay out and invest the same and every part thereof in their or his named or name in the Parliamentary Stocks or funds of Great Britain or in real of Government Securities in England at Interest and shall and do after and transpose such Stocks Funds or Securities for others of the like nature when and so often as it shall seem expedient, and shall and do pay the Interest and Dividends of the sum of Six hundred pounds Sterling part of such Stocks funds and Securities unto my Dear Wife Margaret and her assigns for and during the Term of her natural life and shall and do pay and apply or transfer the residue of such Stocks funds or Securities and also the said principal Sum of Six hundred Pounds Sterling from and immediately after Decease of my said Wife unto and equally between and amongst all and every my children who shall be then living and of such of them as shall be then dead leaving Issue such Issue nevertheless in each case if more than one child taking equally between them only the share which their respective deceased Parent would have taken if living for their respective absolute benefit. But I do hereby declare my Will and mind to be that, the share or shares of any of my said children or their Issue respectively who may be under the Age of Twenty one years when the said Principal Monies Stocks funds and Securities shall become payable or transferable as aforesaid shall not be paid or transferred to him or them until he or they being a male shall have attained that age or she or they being a female shall have attained that age or been sooner Married but the Dividends or Interest of such Share or Shares shall in the mean time be paid or applied for the maintenance or Education or otherwise for the benefit of the Person or Persons to whom the same shall respectively belong. But if any of them my said Children or their issue respectively shall die being a Male before he shall have attained the Age of Twenty one years or being a female before she shall have attained that age or been Married the share of him or her so dying and the unapplied Dividends and Interest there of in each case shall go to his or her Surviving Brothers and Sisters brother or Sister if more than one equally between them to be Original Shares and such accruing share shall again be subject to the like chance of Survivorship to and among the Survivors of them my said Children or their Issue respectively as is before provided with respect to their Original Shares and I approve my said Wife and my said Trustees and Executors Guardians of the persons and Estates of my Children during their Minorities and lastly I direct that they my said Trustees and Executors shall not be answerable the one for the other of them but each of them for his own respective Heirs Executors and Administrators and his and their own debts Deeds receipts neglects and willful defaults only nor shall either of them be accountable for any less which may happen to my said Estate and Effects so that the same happen without his willful neglect and default. And also that they shall and may respectively reimburse themselves and himself all such costs charges and Expences as they may reasonably spend sustain or be put unto in or about the Execution of this my Will or the Trusts thereof In Witness whereof I the said Charles Healey the Testator have to this my last Will and Testament contained in this and the two preceding sheets of paper sit my hand.

and seat that is to say my hand to the two preceding sheets and my hand and seal to this last sheet thereof the Thirteenth Day of September in the year of our Lord Christ One thousand eight hundred and twenty three.

Signed sealed published and declared by the said Charles Healey the Testator as and for his last Will and Testament in the presence of us who in his presence at his request and in the presence of each other have hereunto subscribed our names as Witnesses.

There are some further documents in the bundle relating to the administration of the will and inventories of Charles Healey’s estate, however, besides being fascinating in it’s own right, the above document gives me one very important clue for further research. Charles Healey had a brother by the name of Harvey Healey. Harvey is quite an uncommon first name for the time and added to the also uncommon surname of Healey, this might lead me to the parents of Charles and Harvey Healey.

IF, and yes, that is a big IF, Margaret Healey was Ann Healey’s aunt, then one of Charles’ brothers would have been her father, so researching the next generation of the Healey family might lead to proving or disproving my working theory.