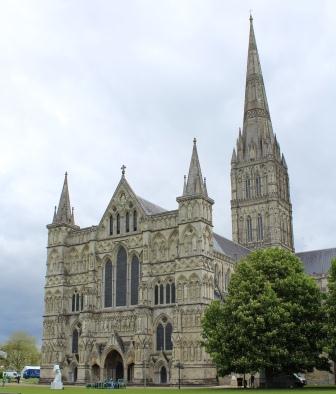 After my early morning visit to Stonehenge, I continued on with the tour to visit the town of Salisbury and the Salisbury Cathedral. Dating back to the thirteenth century, the Salisbury Cathedral, formally known as the Cathedral Church of the Blessed Virgin Mary, has the tallest church spire in the United Kingdom. The foundation stone was laid on 28 April 1220 and by 1258, only thirty-eight years later, the nave, transepts and choir were completed.

Although, to the best of my knowledge, my ancestors were never at the Cathedral of Saint Mary, I’ve encountered the famous cathedral often in my reading. In Edward Rutherford’s novel Sarum, the settlement in the area surrounding Salisbury is followed from prehistoric to modern times. The cathedral was also mentioned in Ken Follett’s novel, The Pillars of the Earth – a novel that I’ve read several times. 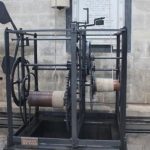 Possibly the oldest working clock in the world, the clock dating from 1386 has no face but was designed to ring out the hours on a bell. It was originally in the bell tower of the cathedral that was demolished in 1792 and was then moved to the Cathedral Tower until 1884 when it was placed in storage. In 1929, it was discovered in an attic of the cathedral and was repaired and restored in 1956. The pendulum and recoil escapement were replaced by a new ferge and foliot escapement to restore the clock back to what was likely it’s original design. Today, the striking mechanism has been disabled but the escapement still operates. 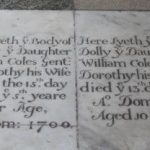 As always in places with long histories, it is the stories of people that speak to me the loudest and the Cathedral of Saint Mary was no exception. As I walked through the nave and transepts, my eyes were drawn to the floor where numerous engraved stones remembered those who went before me. The stones pictured to the right particularly tugged at me.

Here Lyeth ye Body of Dorothy ye Daughter of William Coles Gent: and Dorothy his Wife who died the 15th day of July in ye 5th yeare of her Age, Aq Dom: 1700

According to other epitaphs in the cathedral, William Coles, Esq. was born about 1670 and died on 1 January 1750 a the age of 80. His wife, Dorothy, was born about 1664 and died 28 November 1745, aged 81. I can’t help but wonder about who they were and how they lived. Did they have other children besides these two little girls who they lost so young? I hope so.

The architecture and grandeur of the Cathedral is amazing and the history of it is humbling. All those lives… their feet have walked these same stone floors… their joys and sorrows have been brought to this magnificent cathedral over the last 750 years…their voices and footsteps echo still.