How many times have you searched for an ancestor in the newspaper archives and either found no results or far too many results? Follow these tips to find your illusive ancestor, no matter where they are hiding in those thousands of pages of print.

Before you begin your search, browse a few editions of the newspapers from your ancestor’s time period from the general area in which they lived and note how people were commonly identified in the newspaper articles of the time. Since many of my maternal line ancestors were from Sheffield in Yorkshire, England, I will be providing examples from The British Newspaper Archives collection, an extremely wonderful resource for those with British ancestors. Although this particular resource requires a paid subscription, I’ve found it to be well worth the cost.

Looking at the example to the left, you will see that the names of the people mentioned in this “Town Hall” snippet from the Sheffield Daily Telegraph in 1856 were recorded in various ways. The officials in the second and third lines of the article, “R.N. Phillips, Esq”, “J. Haywood, Esq” and “W. Fawcett, Esq” were mention by initial and last name. The third official is further identified as having the occupation of Mayor.

The accused in the first case mentioned was “Henry Johnson” (first name + last name). He was further identified as being from the city of Nottingham and was listed as being 17-years-old. The victim in the same case was listed as “Mr. Hitchcock” (title + last name) and was further identified as having the occupation of grocer and as residing or having a shop at an address on Hanover–street.

In the last case, the accused are “Wm. Glossop” (first name abbreviated + last name) and a man named “Thackeray” (last name only).

Now that you’ve seen  how people were identified in your time and place, begin to run some searches using the various common name formats and identifiers that you found . Make sure to visit the search tips page of the website you are searching to find what options are available to you. For example, on BNA, I can search by “all of these words”, “some of these words”, “none of these words” (helpful to eliminate irrelevant search results), “the phrase”, the publication place, the specific newspaper, a publication date range and the type of article. I can also sort by relevance or date. Once my search has been completed, I can further refine it with more filters that are displayed on the left hand side of the page.

Each newspaper archive website will be different. Make sure to read the search instructions to get the best results. 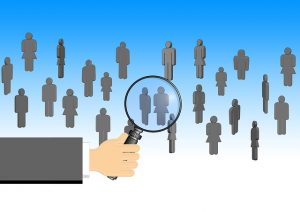 From the analysis of this sample article, we have found many ways that our ancestors names might have appeared in the newspaper. Name variations include:

Other variations of names not in this example include: 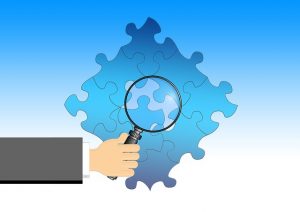 Many of these individuals are further identified by other means including 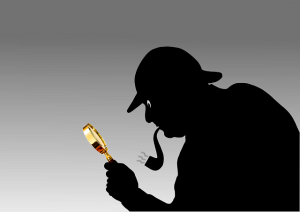 Try each variation of name search using quotations around the name so that the results will only appear if the names appear in that exact order. If broad name searches return too many results, try adding other identifiers to the search string to narrow the results.

Look for an advanced search option where you can narrow the date range to your ancestor’s lifetime, making sure to extend the range to ten or more years after your ancestor’s death. Alternatively, many newspaper archives have date filters that appear after the search results are displayed, letting you narrow your results.

Although it is perhaps more likely that your ancestor might appear in a local newspaper, don’t limit your search to one newspaper or even the city or region they lived in. It was not uncommon for other newspapers to pick up and publish stories from another town, another county or even another country. It is entirely possible that the newspaper that was the source of the story about your ancestor has not been digitized but that another distant newspaper who mentioned the event has been.

If you don’t have many search results, it may be your search is too specific. Try creating a broader search. Sometimes less is more.

When searching for known events, it is possible that your ancestor was not named in the article. Try searching for phrases and places instead.

Remember that the newspapers have been digitised using a process called OCR or Optical Character Recognition. Although OCR results are much better now than they were even a few years ago, the faded, yellowing and fragile state of the original newspapers sometimes means that many of the words are not perfectly recognized by the software. It is possible that your ancestor’s street name and occupation are clear but that his name was misread by the software so try leaving out various pieces of your search and you might just strike gold. 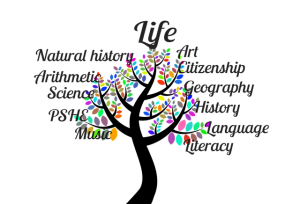 While finding mention of our specific ancestors in the newspaper is the ultimate thrill, simply reading through the newspapers published in your ancestor’s time and place can give us great insight into their daily lives. Search for their town or the street that they lived in. Search for their neighbours and friends. Look for mention of others who shared their occupation or read the help wanted section. Read the advertisements for the products and services available to them. Find out what was going on in their community and think about how that might have affected them. Read the national and international sections to get a feeling for their world view.

This spreadsheet has fields to input your ancestor’s name and details. 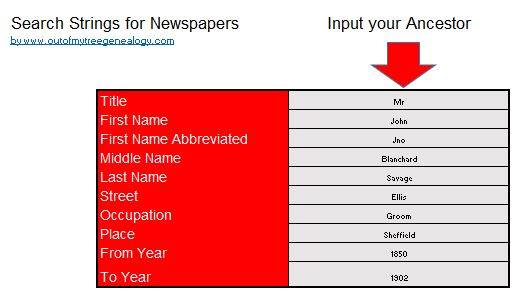 Once you have entered these, 56 search strings will be automatically generated so you can easily copy and paste into the search box. 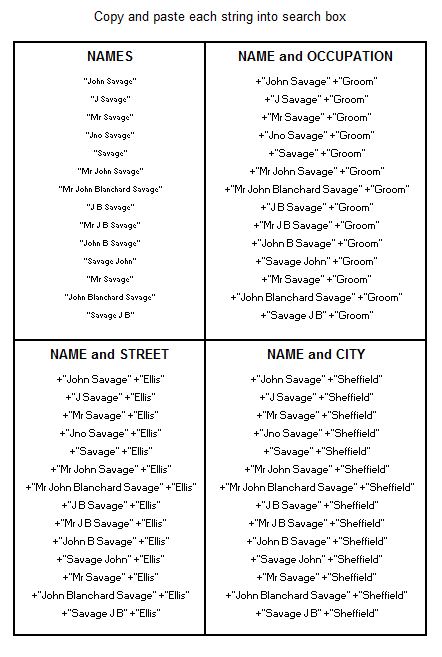 Comment Challenge
Have you found something interesting in the newspaper archives? Share your find in the comments below. I love success stories!

Newspaper Research in the Future

Newspaper Research in the Future