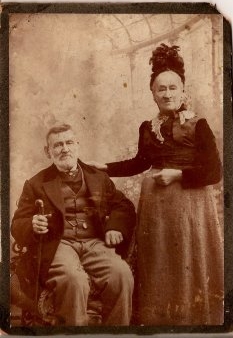 Pictured here in about 1900, George and Harriet look like they’ve withstood the test of time.  George sports a neatly trimmed beard and mustache and wears his suit and vest as though he’s not quite used to the formal apparel.  He has a firm grip on his cane and it seems likely that all of the years of gardening have taken their toll on his back and that maybe a little arthritis has settled into his bones.  Harriet has only the bit of lace at her neck to offset the austerity of her dress.  They appear to be sitting in a conservatory or green house of sorts and one can almost feel the sunshine streaming through the windows.

1. George WILLIAMS was baptised on 2 April 1823 at St. Thomas Church in Winchester, Hampshire, England.  George died at the age of eight-four of senile decay on 19 December 1907 at 35 Prince Street in Ryde, IOW, Hampshire,  and was buried in Ryde Cemetery on 23 December 1907.   He married Harriet Storey on 5 March 1857 at the parish church in Newchurch, IOW after banns.

According to George Williams’ death certificate, he was eighty-three years old at the time of his death in December 1907 in Ryde on the Isle of Wight,  which would suggest he was born about 1822.  The informant on George’s death certificate was his son, so while this is not primary information, George’s age at death is likely more reliable than had the informant been a non-relative.  George’s marriage certificate shows his father was Benjamin Williams, a coachman.   The 1851 census shows George’s age as twenty-six (suggesting a birth year of about 1825) and his birth place as Winchester, Hampshire,  and subsequent census records support a birth year from 1822 to 1825 and birth place of Winchester.

Looking through baptismal indexes from Winchester, only one George Williams, with father Benjamin a coachman, is found.   The corresponding parish register shows that he was baptized on 2 April 1823 at St. Thomas Church in Winchester.   His mother is listed in the record as Jane Williams.  No marriage was found in the Hampshire mainland marriage indexes for a Benjamin Williams and Jane in any time period.   In the Isle of Wight marriage card index however, there is a record of Benjamin Williams marrying Jane Fellows at Newport on 7 June 1813,  and the corresponding parish register entry confirms this.   There are no burial records in the Hampshire mainland indexes for either Benjamin or Jane Williams that appear to fit the appropriate ages  but on the Isle of Wight, we find a Benjamin Williams burial record from 19 May 1829 in Newport.   Two weeks after this burial, we find a record of Jane Williams of Newport being given poor relief of 5 shillings for her and three children.   On 14 August 1830 we find another record indicating that Jane Williams of Newport was being admitted to the House of Industry in Newport along with her children Henry, aged twelve, George, aged eight, and Charles, aged eighteen months and a note indicating that her husband was dead.   Searching the Isle of Wight card index for Henry Williams, we find a baptism on 4 February 1821 at St. Mary’s church in Carisbrooke.  The parish register entry confirms that this Henry was the son of Benjamin Williams, a coach maker and his wife Jane of Castlehold,  corroborating that this Williams family is the family of the George Williams we are researching.

With no records existent to disprove the theory and many diverse supporting records, it is very probable that the Benjamin Williams and Jane Fellows of the Isle of Wight are the parents of George Williams.

2. Harriet STOREY was baptised on 12 February 1826 at the parish church of Newchurch, IOW, Hampshire, England.  Harriet died at the age of eighty-one of senile decay on 2 June 1906 at 75 St. Johns Road in Ryde  and was buried on 7 June 1906 at the Ryde Cemetery.

Harriet Williams’ death certificate shows that she died at the age of eighty-one at Ryde on the Isle of Wight in June of 1906.   This would suggest that her birth occurred in about 1825.  While this is not primary information, her age was given by her husband, George Williams and is likely to be somewhat reliable.  The marriage certificate for Harriet Storey to George Williams shows that her father was Thomas Storey, a coachman, deceased.   Census records from 1861 onwards all show Harriet Williams as being born in Ryde on the Isle of Wight.   Prior to her marriage, the only 1851 census record showing a Harriet Storey in Ryde shows her living with her mother, Rebecca Storey.   A search of the Isle of Wight baptism index shows only one Harriet Storey, baptized at the parish church of Newchurch on 12 February 1826  which is consistent with Harriet’s age throughout the various census records and with the age at death given on her death certificate.  The parish register entry confirms the information in the index.   Her parents are listed as Thomas and Rebecca Storey.  Thomas is a coachman.  A search of the Isle of Wight marriage indexes for Thomas Storey and Rebecca shows only one entry for a Thomas Storey and Rebecca Wearne,  and the parish registers from St. Thomas Church confirm the marriage.    A newspaper article from the Newport News gives an account of the death of a coachman, Thomas Storey and indicates that he left a wife and five children,  a fact consistent with the family grouping of the Rebecca Storey family in 1841.   Considering this evidence from many sources with no conflicting evidence, it is very likely that Harriet Storey’s parents were Thomas Storey and Rebecca Wearne.