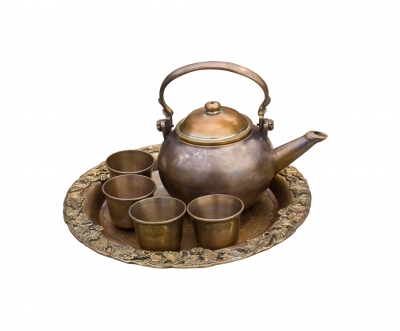 The Scotch do not say “to make tea,” but “to infuse the tea,” which is more correct in every respect. By boiling the tea-leaves, you get from the a bitter principle, and you drive off the delicate perfume of the tea. For this reason, the teapot should never be kept hot by letting it stand on top of a cooking-stove, over a lamp, or where it is likely to be made to boil. Excessively bad tea is made in some parts of the Continent by people who do not know better, by putting a small pinch of tea into a large kettle of water, and letting it boil till they have extracted all its colouring matter, in which they think the goodness of team consists. A metal teapot is better than an earthen one, and the brighter it is dept the better is the tea. Rinse the teapot with boiling water. Put in a bumping spoonful of tea for each person, and one for the pot. Pour over it just enough boiling water to soak the tea. Let it stand a few minutes, and then fill up the pot with boiling water. Do not put in carbonate of soda to soften the water and make the tea draw better; i.e., to make a wretched saving of tea, unless you are in absolute poverty. The water, in fact, is softened by boiling, which causes it to deposit some of the matters it held in solution; witness the “fur” in long-used tea-kettles, and the line which settles at the bottom of many waters after boiling.

How to Make Tea, from Cassell’s Household Guide on Google Books: http://bit.ly/1rcKorZ

Image Credits: by Stoonn on freedigitalphotos.net