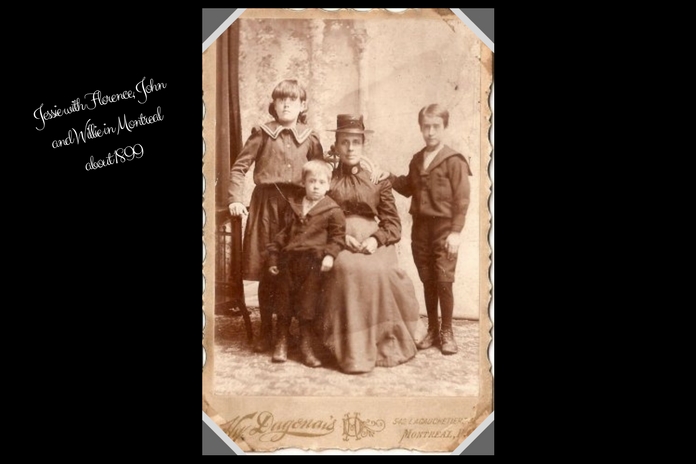 When Jessie became a widow, she was only thirty six years old. William had left her with four small children aged ten, eight, five and two.

Sometime between William’s death in August of 1893 and October of 1894, Jessie emigrated to Montréal, Québec, Canada.  Her parents were still living on St. John’s Road in Ryde but for some reason, Jessie decided to emigrate instead of returning there. Her reasons for this bold action are not known but it seems likely that she first journeyed north to Preston, Lancashire where William’s sister Frances lived with her husband and three sons and where William’s parents were spending their last days in the Fullwood Workhouse.  She may have been feeling overwhelmed with her responsibilities and so decided to leave her oldest daughter Laura behind under Frances’ watchful eye.

On 22 November 1894, Jessie gave birth to a son in Montréal, whom she named William Bond, perhaps after her dearly missed first child.  William’s father is unknown but perhaps he had something to do with Jessie’s rash decision to emigrate.

By 1901, Jessie was living with a man named Sullivan, an Irish groom.  The 1901 Canadian Census shows his name as Thimothé Sullivan but the Lovell Montréal street directory shows the occupier of the St. Genevieve address to be Thomas Sullivan for two years running so it is likely that the census name was in error.   No record of a marriage for Jessie and Thomas (or Thimothé) has been found in England or in Canada but Thomas and Jessie lived together in the St. Antoine ward in Montréal. Laura Alice was still living back in Preston, England  near her Aunt Fanny but the four younger children: Thomas, Frances, John and Willie were in Montréal with Jessie and were using the name Sullivan. But officially married or not, Jessie soon found herself a widow again.  In the 1903 Montréal city directory she was listed as Sullivan, Mrs., wid J.H.

It may have been about this time when, in desperation, Jessie began to sell newspapers from the doorways of the major bank buildings. As her business grew, she talked her way into being allowed to setup a small booth in the lobby of one such bank. Before long, she had booths in all the bank lobbies and was paying young men to sell the newspapers for her. Each day, she went around collecting the money and always carried a large bag of nickels.

After being separated from her family for nearly ten years, young Laura left Preston at the age of 20.   Her ship arrived in Montréal on 2 May 1903 and no doubt Laura was excited to see her family once more but her visit was a short one and it was not long before she moved on to Seattle, Washington.

Jessie’s son Thomas and her daughter Frances were also more than ready to leave home possibly to escape the drudgery of helping Jessie with her newspaper business and in about 1906, they set off west for Winnipeg, Manitoba.   In March of 1907 the news came that Frances had married in Winnipeg to James Downie  and the following year Jessie received word that Frances had given birth to a baby boy who they named Leonard.  Jessie was fifty years old and had just become a grandmother.

That same year, Jessie heard from Seattle that Laura had married Eugene Lawrence,  a young man originally from Baltimore and a year after that she became a grandmother for a second time with the birth of Josephine Elizabeth Lawrence.

By the time of the 1911 census, Jessie was living at 267 Charles Borromee in Montréal with Donald Williams, an Ontario native. Again, no record of a marriage between Donald and Jessie has been found but Jessie’s two youngest sons, John and William, were living with them and were using the last name of Williams. John’s occupation was a theatre electrician and William still attended school.

Donald and Jessie were likely kept busy with their expanding newspaper sales business, constantly on the lookout for reliable boys to sell their papers.  They would no doubt have received letters from Laura in Seattle and Frances Josephine in Winnipeg keeping them up to date on their young families.  In 1912, Laura would have written of the birth of baby Edward Thomas in Seattle and Frances may have written, telling of her new husband Frederick Miller.  The following year, Jessie would have learned of the birth of Frances Josephine’s son Allen, followed quickly by a daughter Ruth Elizabeth.  Perhaps on 15 May 1914, when Thomas sustained a serious head injury at work, Frances Josephine may have urged her telegraph operator husband to send a message to let Jessie know of the situation, writing later with details of his recovery.

Then a few months later, on 11 November 1914 at 2 p.m., Donald Williams died in the Montréal General Hospital and Jessie was a widow yet again at the age of fifty seven.   She had the newspaper business to support her this time and soon after Donald’s death, Jessie and her two boys, John and William, moved to 121 Dalhousie Street.

Only a few months before Donald died, England had declared war on Germany and the situation in Europe was intensifying.  As 1916 began, Jessie’s boys could be held back no longer and first John joined the forces on 26 January 1916 in Toronto  where he had been working and then William, not to be left behind, joined up on 10 February in Montréal.

When John enlisted, he said that his mother was Jessie Williams, a widow, and that he, John, was her sole means of support since all his other siblings were married.   This entitled Jessie to receive a separation allowance from the army.  When William enlisted just over a week later, he said his mother was Jessie Bond, a widow and that he, William, was her sole means of support.   For the duration of WW1, Jessie was to receive money from the Army for both her boys, compliments of their deception.

Just two weeks after enlisting, William was already in trouble with the army.  He was docked four days pay and received a sentence of twenty eight days detention for being absent without leave.  He began his detention, but after two weeks of being in the brig, William’s throat became sore and he was diagnosed with tonsillitis.  He was admitted to the Royal Victoria Hospital in Montréal for a tonsillectomy and was discharged after nineteen days.  By the following month, William had disappeared once again and was given a further ten days detention and was again docked a days pay.  He managed to follow the rules after that for some months but in August he went absent without leave and was tossed in the brig for seven days and forfeited seven days pay.

In fall 1916, young William finally got his orders.  He was to leave for Europe on 27 September aboard the SS Laconia and would arrive in England on 6 October.  Immediately after Jessie heard that her youngest had arrived overseas, she heard from John that he was also being sent off to the front.  John left on 25 October aboard the SS Corsican and arrived in England 5 November.

By Christmas 1916, William was at the front in France with the 24th Battalion and on 30 December he was wounded at Bully Grenay with a gun shot wound to his right thigh that fractured his leg.  He was sent to the hospital at Camiers but was judged well enough to return to the front on 11 January.  No sooner had William taken up position than he was again shot in the same leg although this time the wound was minor.

In April of 1917, William was wounded again near Neuville St. Vaast with a gun shot wound to the scalp and received a concussion.

John would have written to say that he was also stationed at the front in France, not very far from William’s unit and that he had been involved in shoring up trenches near Vimy Ridge.  Conditions were terrible.  Many soldiers had perpetually wet boots and suffered from what they called trench foot.  The ground was wet, especially in the trenches, and mud was everywhere, even in the soldiers’ rifles, if they weren’t kept covered with the squares of canvas issued for that purpose.

William continued to flout authority in any way he could and on 29 August 1917, he was sentenced to 14 days for insolence to an NCO and two months later on 24 October he was sentenced to 14 days for neglect of duty.  Then on 10 November he was wounded at Passchendalle, receiving shrapnel in his right forearm and another concussion and was sent to the 16th field unit to be patched up.

John was of a much different temperament than William and followed orders as best he could.  On 31 January 1918, John received a Good Conduct Badge for two years of good service.  The two brothers continued the war in France in much the same fashion.  John tried to make the best of things and did his duty while William was constantly absent without leave and spent much of his time in field punishment and forfeited many days pay over the next year.

William sailed home aboard the HMT Aquitania.  He embarked in Liverpool and arrived back in Halifax on 24 January 1919.   Even back home, William continued to make matters difficult for himself with the army.  On 9 April 1919 he was declared illegally absent and was apprehended as a deserter on 25 April.   On 22 May, he was again charged with desertion and received fourteen days detention and forfeited thirty five days pay.   While William served this detention, his brother John arrived quietly back in Halifax aboard the H.M.S. Cedric on 27 May 1919.   He took the train to Ottawa where he was discharged on 29 May 1919 and then carried on his journey back to Toronto where he was to stay at the home of his fiancé’s parents on Roncesvalles Avenue.

Finally, William’s detentions were served and he was discharged from the army at Montréal, Québec on 4 June 1919.   Although William had come home to stay after the war, Jessie was not to have her son back for long.  On the 24th of July 1922, William died in Ste. Anne’s Hospital in Montréal of tuberculosis that he contracted during the war.  He was buried in Soldiers Cemetery section of Mount Royal Cemetery in Montréal.

Not long after William’s death, Jessie moved from Dalhousie Street to Boyer Street, eventually settling in a row house at 4813 Boyer.   Although she did well with her newspaper sales perhaps she was lonely and with the extra rooms available she decided to take in a boarder.  Frank Hayes moved into the house  and as Jessie got older he became a valued friend and companion.

On the 29th of December in 1941, Jessie passed away at the age of 84 at 4813 Boyer Street in Montréal.  The Montréal Star carried her obituary which read:  “On December 29th 1941 at her late residence 4812 Boyer Street, Jessie Williams, wife of the late Donald Williams, age 78 years. Funeral from the Chapel of Jos C Wray and Brothers at 1234 Mountain Street, Funeral from the Church Home at 9:45 AM Friday, January 2nd. Internment in St. John’s sur Richelieu – Count of St. Jean”.  Despite what the obituary said, Jessie was buried in the Mount Royal cemetery in section G 2227-E.