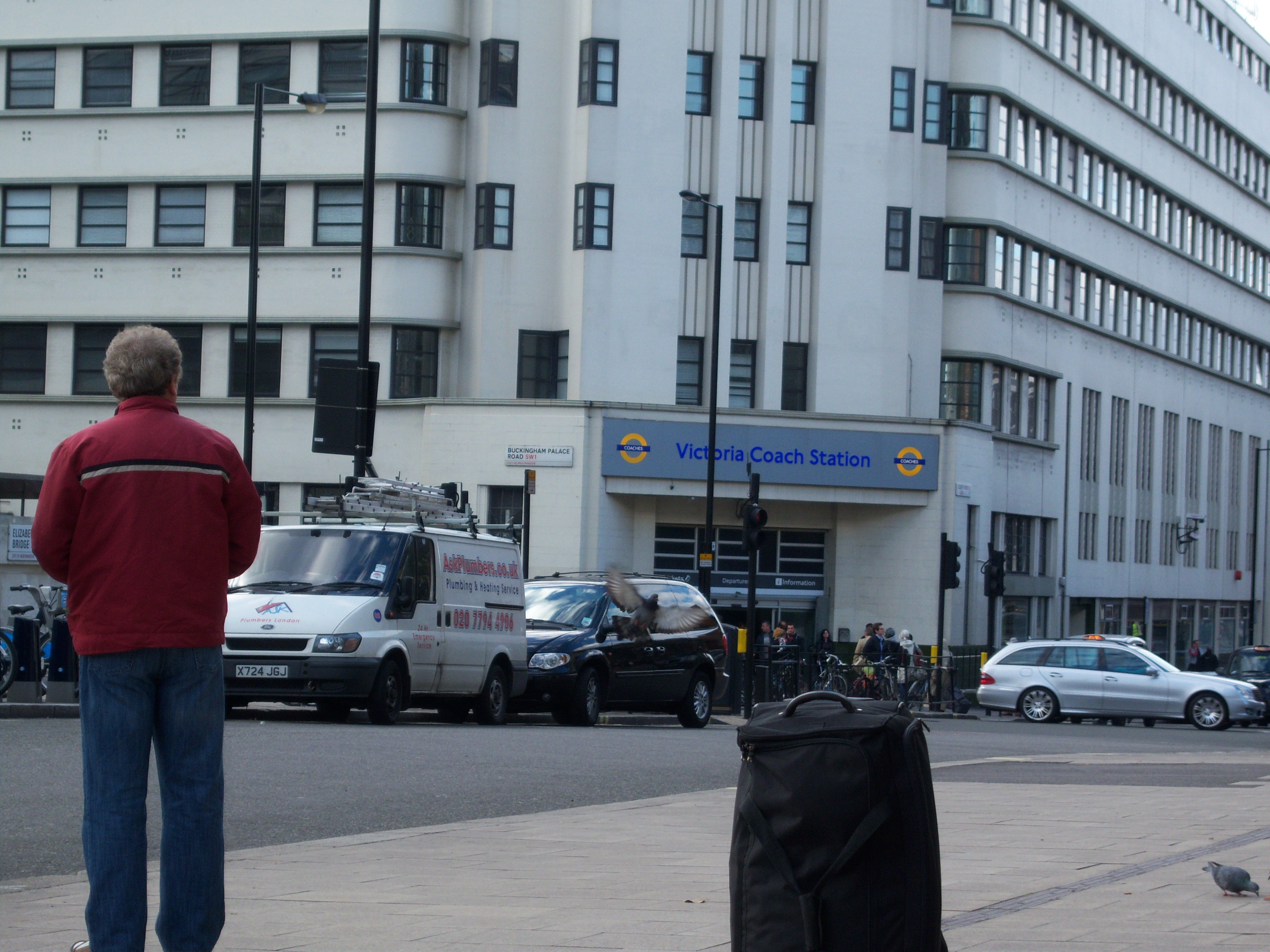 Got to the park and fly in more than enough time.  I was expecting crazy traffic because there was an overturned tractor trailer of cows on the highway but it was not as bad as I thought.  Parked the car in the park and fly lot and got out to get my suitcase out of the back.  Decided to put my purse into my backpack for ease of carry, dropped my keys in the pack too and then walked down to the pickup, got on the shuttle and half way to terminal 3, I realized that I forgot to lock the car.  So I stayed on through terminal 1, back to arrivals at terminal 3 and then terminal 1 and then through the self park lot and back to economy where I asked the driver to slow down and open the window as he passed my car so I could hear the ‘beep’ of the lock and then back to self park, back to terminal 3.  Despite all of this, I still made it through security and to the gate with a half hour to spare.

I tried very hard to sleep on the plane but the speaker for the PA was immediately over my head and every time we hit a bit of turbulence the hostess felt the need to explain the fasten seatbelt sign in full.  I think I dozed for maybe 45 minutes at a time until they came through with breakfast about two hours before we landed.  By then I gave up and tried to wake up with a bad cup of coffee.

Clearing customs was about the same as anywhere with frowning people asking terse questions.  I wonder if they have to go to school to learn how to be miserable?  I never thought my luggage was going to come down the ramp.  Seemed like I waiting forever and ever for it.  Like all airports everywhere, there is a huge crowd of people standing waiting for their luggage but somehow they know who isn’t waiting and send their luggage first so that it goes sadly around and around and around waiting to be claimed.  And there is always one bag that looks suspiciously like yours and every time it comes around you get all hopeful, thinking maybe this time it is yours.

Luggage finally in hand, I started through the terminal looking for the Gatwick Express train to Victoria Station in London.  Huge signs everywhere and I shouldn’t have worried because I couldn’t possibly have missed it.  The Express turned out to be very comfortable, relatively clean and they even came around with a drinks trolley.  Pulled into Victoria Station thirty minutes later and came out in the London smog.  I wasn’t sure where to go to get my Greyhound bus to the Isle of Wight and asked one of the station workers for directions.  He pointed, gestured and spoke and then I had to get him to repeat himself, more slowly and with more gestures so I could understand what he said.  Who would have thought that English should be this hard to understand?  From what he said, the “Coach Station” was around the corner and down the block so off I went, double timing it down the street.  I reached the Coach Station, went in side, queued for the information booth and asked again. 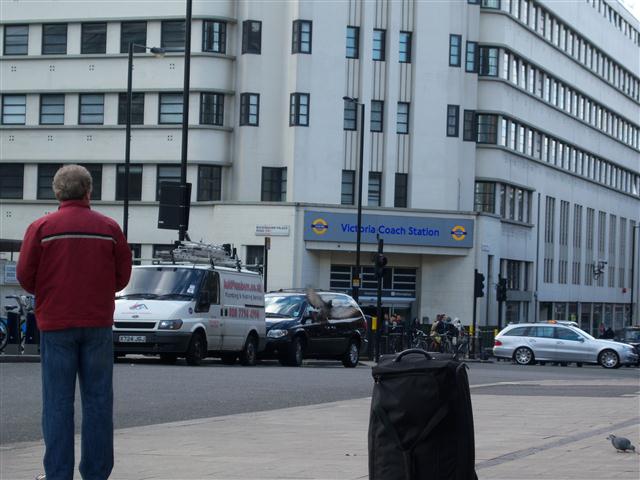 Around back of the white building across the street I was told – but all the buildings across the street were white and I was running out of time.  Finally found the back lane where the tour “coaches” pull through but saw my Greyhound just pulling out of the lane as I reached it.  Bloody Hell – 5 hours to wait for the next coach.  I spent the waiting trailing around the station in ever widening circles trailing my suitcase behind me.  Those four wheels on the bottom are brilliant!  I remembered Chris told me to eat and drink like it was England time so I went and had a glass of wine at the bar at 1 in the afternoon London time (which would only have been eight o’clock in the morning in back in Toronto) and I’m blaming the wine all on her.  I walked over to see where my hotel will be in London (and it certainly does not look like the pictures but oh well).

The only toilet around was the public one in the Coach Station down a flight of stairs lugging all my stuff.  When I got around the corner, a turnstile greeted me with a sign saying 20 pence to enter.  A couple of young girls were there routing through their handbags looking for change so I reached in my pocket, hauled out the change I got from the wine and asked then “are any of these 20 p?”  My first coin lesson: the 20 p coin is the one with the sort of octagonal edges.

Finally, finally it was time for the 5:10 bus to load up for the Isle of Wight.  It was just as advertised:  clean, new, comfortable seats and wi-fi on board.  I could hardly wait to see the scenery, or anything but the six blocks around the Coach Station.  We pulled out into traffic and it seemed totally terrifying to be on the left side of the road, especially when we turned.  Traffic lights go green, yellow, red then yellow then green again.  Milliseconds after the light is green, we’re off again, speeding along a few inches from the car in front of us.  I was looking from one side of the road to the other, trying to drink in all of the sights as we wound our way through London.  Next thing I knew it was dark and we were pulling into Southampton.  So much for the journey…

The bus dropped us in front of the Hovercraft terminal and I grabbed my luggage.  When I went inside to the counter, the attendant asked my name and pulled out my ticket.  It wasn’t ten minutes later that they opened the gate and out we went to the Hovercraft.  My large case went into the luggage bin on the side and we all got in. 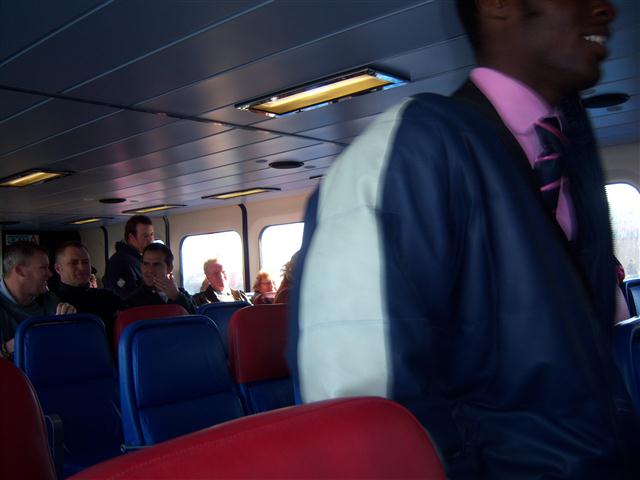 It was only about ten minutes before we were pulling in to the other side but by then I was totally done in and I had no idea where to catch the bus to Shanklin and even less of an idea how I was going to find my hotel in the dark.  As I came out of the hover terminal I spotted one of the passengers climbing into a taxi and sighed with relief.  I’m not sure how much a taxi to Shanklin is going to cost but at this point, I past caring.  I went into the terminal to ask where to get a taxi.  Taking pity on me with all my bags, the counter guy rang the local taxi and one of them came around from the taxi stand around the way and was there in minutes.

Since it was dark, I couldn’t see much but occasionally I caught sight of a sign and all the places were eerily familiar.  The taxi driver found the street that the hotel was on but then had to drive up and back before I finally spotted my hotel.  I checked in, shown to my room and then as tired as I was, I dumped my bags and headed back up to the village to get a bite to eat knowing I’d be starving by morning otherwise.  The first place I saw was called “The Village Inn”.  I ordered some fish and chips and got this huge, I mean gigantic, piece of fish.  It was on a serving platter and hung off the ends!  The pub was totally cool, just like what you’d expect a pub in England to be like – cozy with mis-matched chairs, old beams and Wedgewood plates and old pictures on the walls.  I ordered a glass of wine and was amused to find out that wine comes in small, med and large glasses!

Arriving back at my hotel, I turned on my laptop, and tried to call Mom using Skype.  A message came up saying “this service is blocked by this network.”  So much for that idea… I pulled my electrical adaptor out of my bag and tried to plug it in but every time I tried to push it in the outlet the prongs collapsed and finally I gave up and just fell into bed.

Friday – Off to London to Visit the Queen