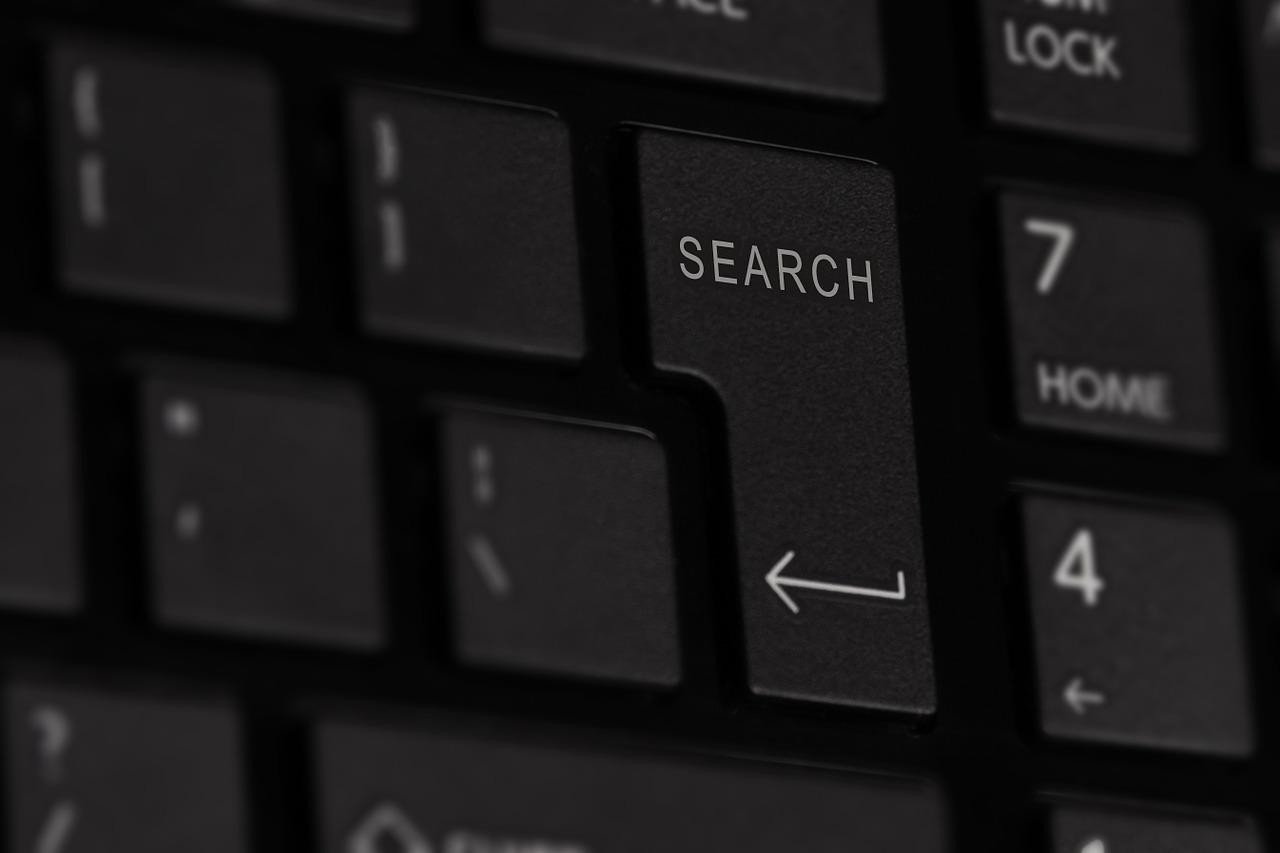 In this post, I will begin to search for new evidence based on the gaps in my existing research.

The most obvious place to begin searching for new evidence for George Brown and Ann Healey is with their marriage. I have a date of 30 September 1833 recorded in my database for their marriage but no source citation. In an email correspondence with my cousin, she told me that this date probably came from her early research. She received the information from a Sheffield based researcher she hired to do some look ups years ago but did not receive any source information for it although she was told that it came from the parish records of St. Peter’s Church that eventually became the Cathedral Church of St Peter and St Paul. 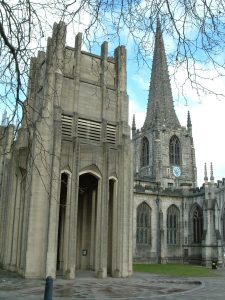 The Sheffield Family History Society has indexed the Baptisms and Marriages from the church registers and I was able to download those indexes from the GenFair website. Disappointingly, the marriage index only gives the names of the bride and groom and the page number but strangely does not show the marriage date. However the entry for George Brown and Ann Heeley is present and I now know that their marriage did happen at this church and that it appeared in book C, page 203, entry 608.

Since this marriage took place after George Rose’s Act (Act for the better regulating and preserving Parish and other Registers of Birth, Baptisms, Marriages, and Burials, in England) of 1812, it would have been recorded in a register on a form that should have included not only the names of the bride and groom, parish of residence, and the date of the marriage but also the names of the witnesses to the marriage.

In February of 1812, George Rose, after some comments on the current, imperfect way of keeping Parish Registers, moved for leave to bring in a Bill to improve them to aid in the proof of pedigrees of persons inheriting property or personal estates. On 31 December 1812, the act, named after Rose, went into effect and from that date onwards, all baptisms, marriages and burials were to be recorded in parish registers to be provided by His Majesty’s Printer at the expense of the parish. Every entry and every page was to be numbered and the entries were to be filled in as soon as possible after each ceremony in a fair and legible hand.

Following is an example of a marriage entry from 1822 showing the forms that were used to record a marriage: 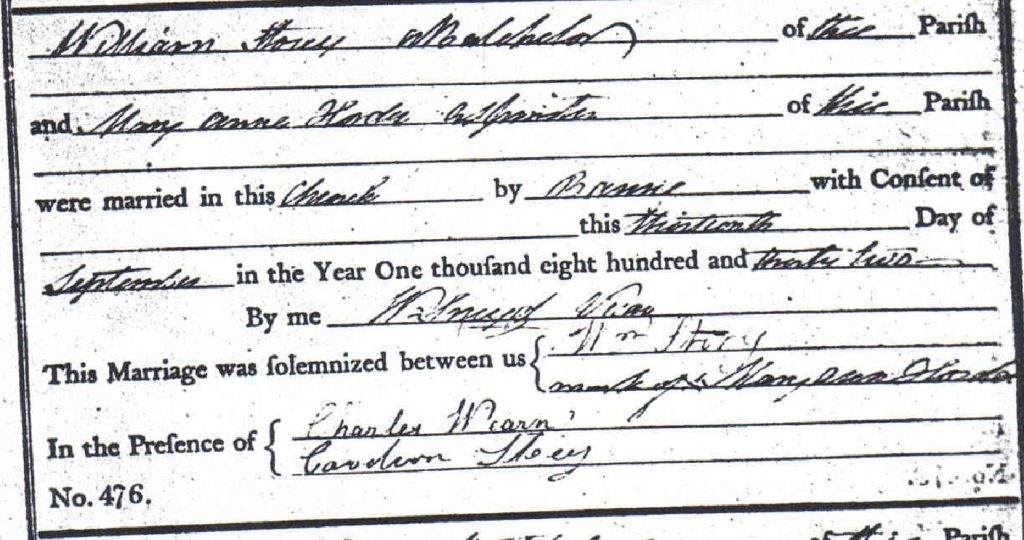 The church registers (baptisms, marriages and burials) date from 1560.

A lack of adequate space at the parish church prompted parishioners to raise a public subscription for a chapel-of-ease nearby. The new church of St Paul was built on a piece of land near Pincheon Croft Lane (later Pinstone Street) and consecrated in May 1740. It obtained baptism and burial rights in 1743 and marriage rights in 1848. The Church closed in December 1937 and was demolished in the following year to make was for a new Town Hall extension. The site is now occupied by the Peace Gardens.

The Parish Church was granted cathedral status with the formation of the new Diocese of Sheffield in 1914.

The burial grounds were closed in 1855.

Since I have been unable to find any resource for these registers either digitally or on film, I’ve emailed the Sheffield Archives to see if I can obtain a copy through their copy service now I know the book reference, the page and the entry number.

Just what I was hoping for! One of the witnesses to the marriage was Margaret Heeley. This must be a relative of Ann Heeley and finally I have somewhere to start with the family.

While the Birth, Marriage or Death certificates I’m missing for the immediate family members might not tell me anything new or relevant, they can confirm my existing information and it is possible that names of witnesses might provide a clue:

Before ordering, I checked with my cousin and found that she already had a few of these certificates and was able to email me digital copies: 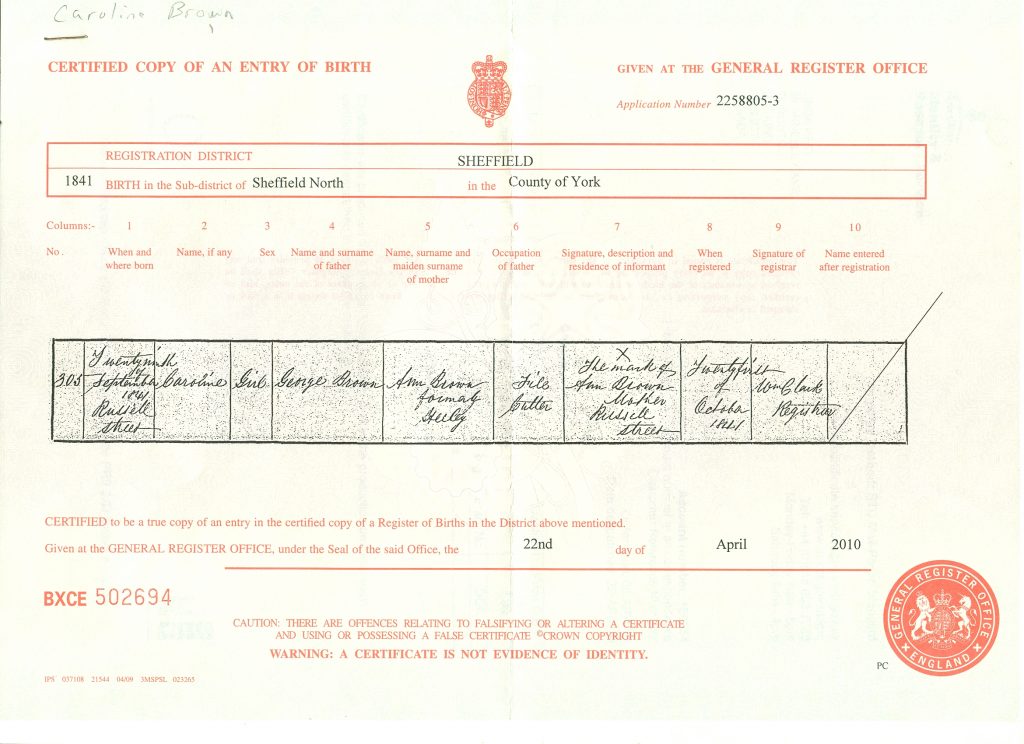 From this certificate, besides learning Caroline Brown’s exact birth date, I also learned that by 29 September 1841, George and Ann Brown had moved from Watery Lane where they were living on 6 June 1841, to Russell Street. Russell Street was due east of Watery Lane, but on the other side of Penistone Road. Ann Brown’s maiden name was spelled Heeley with an ‘e’ as it was in the parish register.

From the marriage certificate of Walter White and Caroline Brown, I learn that they were married on Christmas Day in 1859 at the Parish Church. Walter White’s address was Church Street and Caroline Brown was living in School Croft. By studying an old map of Sheffield, and by reading some historical books, it seems as though the old grammar school and the free writing school (tagged as 14 and 15 on the map below) were located in School Croft near Tenter Street so it would appear that these two addresses were in the usual neighbourhood, very close to St. Peter’s church (tagged 21 on the map below). 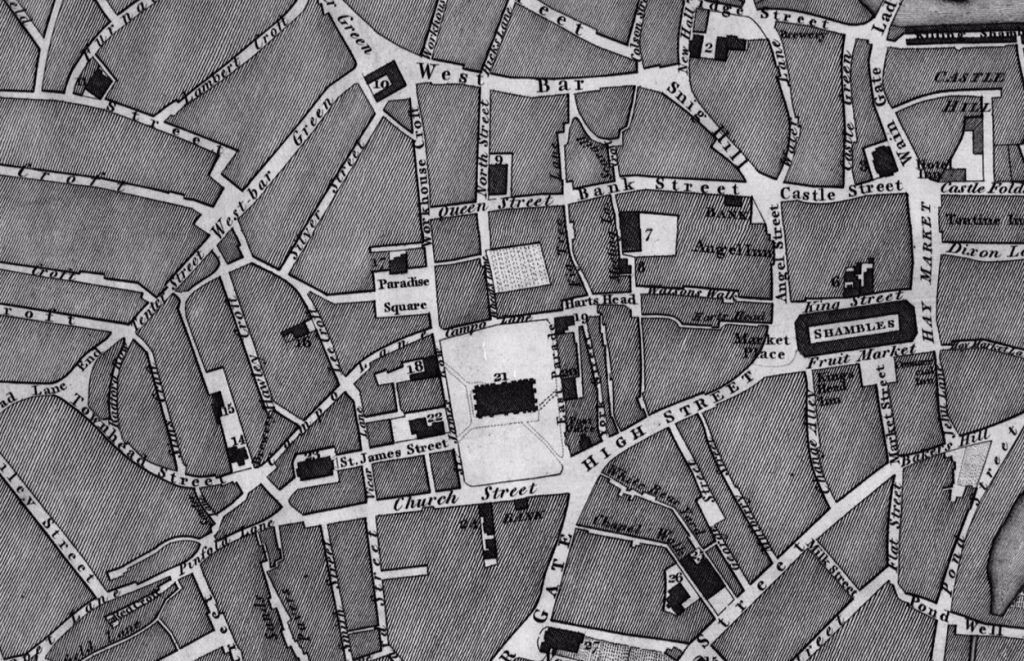 The signatures of the witnesses at Walter and Caroline’s wedding are quite difficult to read. The first might be be John Kirk and the second might be J. Chatterton.

There was a James Chatterton, age 29, filesmith living at 68 Furnace Hill in 1861 who might be the second witness. His wife’s name was Ann and from a BMD search, her maiden name was probably Betts, but with a cursory search, there is no evidence of a family relationship with Walter or Caroline. There are a plethora of men named John Kirk in Sheffield at the time of the 1861 census and none stand out as the likely witness.

From this certificate, I learn that George Brown married Mary Ann Holmes at St. George’s Church two days before the wedding of his sister Caroline on 23 December 1859. George was 22 years old, a bachelor and a file cutter. His address was listed as Edward Street and his father was George Brown, also a file cutter. Mary Ann Holmes was 20 years old, a spinster, also listed as living on Edward Street and her father was Charles Holmes, a shoe maker. The witnesses to the wedding were Thomas Sykes who made his mark and Caroline Brown who made her mark.

There are a number of men named Thomas Sykes in Sheffield, but there is one Thomas Sykes living in Pitsmoor in 1861 who has a wife by the name of Elizabeth. Living with the Sykes family is Elizabeth’s widowed mother, also Elizabeth, with a surname of Chatterton which is the surname of the second witness at Caroline Brown’s wedding to Walter White. Thomas Sykes is involved in scissor manufacturing.

If J Chatterton, witness to Caroline Brown’s marriage is related to Thomas Sykes, witness to George Brown Jr’s marriage, it seems at least plausible that this family might be in someway related to the Brown family on either George’s side or on the Heeley side although no obvious link is yet apparent.

On 10th February 1897, Ann Smith, female, 48 years, wife of George Smith a Cabinet Maker of 112 Scotland St Sheffield, committed suicide by poisoning herself with laudanum during a state of temporary insanity, Certificate received from D Wightman, Coroner for Sheffield, Inquest held 12 February 1897, registered Thirteenth February 1897. She died at the Sheffield Infirmary so presumably she was discovered prior to her death and taken there for treatment.

Laudanum is a tincture of opium, containing about ten percent opium by weight. At the time of Ann Smith’s death, laudanum was used in many patent medicines that were sold to relieve pain or act as a sleep aid. Even infants during this time period were fed laudanum to sooth them or to relieve colic. It could be purchased from the local chemist and was in wide spread use. It was less expensive than alcohol and was commonly taken by women for menstrual cramps or vague aches and pains.

Suicides in Ann Smith’s time were often said to be a result of temporary insanity. Before the Interments Act of 1882, a person found to have committed suicide ‘felo de se’ (Latin for felon of himself) could only be buried in a churchyard at night and no burial rites could be administered. If the suicide was ruled ‘non compos mentis’ (Latin for not of sound mind) then the restriction did not apply. After the Interments Act was passed in 1882, these restrictions no longer applied and the deceased could be buried at any hour and with the usual rites, however the custom of declaring that the suicide was as a result of temporary insanity persisted.