For years, I had a seven-year gap in my great-grandmother’s story. The good news is that I’ve had several genealogical break-throughs this week. The bad news is that I now have a mystery in Montreal.

William Bond, a night watchman at some arches in Duke-street, near London Bridge, was found lying in an insensible condition, and died soon after reaching Guy’s hospital. His wife, who had traversed all the way from Cable-street with two little children to bring his dinner arrived to find him dying, and the poor woman was overcome with grief. ~Lloyd’s Weekly Newspaper of London, 27 August 1893.

Up until very recently, I knew that my great-grandmother Jessie was in London in August of 1893. On the evening of 26 August 1893, Jessie journeyed some 4-1/2 miles from her home on Cable Street near the docklands of London across either London Bridge or Tower Bridge to take dinner to her husband, my great-grandfather William Bond, who was at work at his job as a watchman in Duke Street. With her were my grandfather John and his youngest sister Frances. The two older children, Thomas and Laura, remained at home.

When they arrived in Duke Street, they found William lying insensible, foam around his mouth. They loaded him into a wagon and ran with him to Guy’s Hospital where he was pronounced dead.

An inquest into his death revealed that he had, while in a drunken state, taken a drink of smelling salts which resulted in his death. The ruling of the coroner’s jury was accidental death from corrosive poisoning. 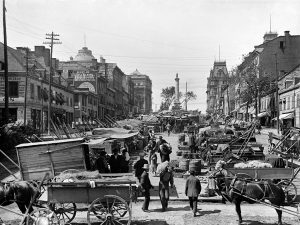 The next record I had for Jessie’s family was for the 1901 Canadian Census, seven years later, in St. Antoine, Montreal. The family name was now Sullivan and consisted of:

According to the census record, the family, with the exception of young Willie, had emigrated to Canada in 1894 but I could find no record of the family in the Canadian passenger records, even though I had gone manually through every single ship’s manifest on the LAC website for the period between August 1893 and December 1894.

What happened during the seven years between 26 August 1893 when William Bond died and 31 March 1901 when the Canadian census was taken?

Then a couple of weeks ago, I decided to have a look at the outbound passenger records for the UK. And EUREKA! I found them. The family name on the outbound records was O’Sullivan. There were Timothy, Jessie, Thomas, Frances and John. The Lake Huron left Liverpool on 14 April 1894 and arrived in Montreal 32 days later on 26 April 1894. The O’Sullivan family was part of a group of 61 British people sent to Canada in conjunction with the Self Help Emigration Society.

When I later looked up this ship on the inbound passenger records, I found that the corner of the manifest where the O’Sullivan family was listed had been torn off!

Now I had something to work with. I now knew that it was likely that Timothy was William’s father and that the family could be listed as Sullivan OR O’Sullivan. I began to search the Drouin Collection in earnest, determined to find something to fill in the seven-year gap.

Filling in the Gaps

The first record I found was a baptism for Willie Sullivan. Contrary to the WW1 record, he was actually born on 22 November 1895, not 1894.

Now I was getting somewhere. I began searching for Tim and Jessie’s marriage record or a burial record for Tim since from the Montreal city directories about 1903, it appeared that Tim had died since Jessie was listed as his widow.

I tried the obvious searches but found nothing so I began to wonder if Sullivan or O’Sullivan had been mis-transcribed. I tried a first name only search for Tim and this immediately turned up a shocking discovery and unearthed a mystery.

I’m not sure why I even clicked on the image for the record I found, since I was not expecting to see my ancestor. The index showed a marriage for Timothy Oscar and Jessie Mary Williams and I was looking for Timothy Sullivan and Jessie Harriet Bond (although Jessie’s maiden name was Williams). The image was poor and hard to read but what caught my eye immediately was the “William Bond” halfway down the record. That had to be my great-grandfather’s name! I still can’t quite make out what it says exactly but hope to be able to enhance the image with some photo editing. I had a suspicion that this might be my Jessie. So what’s going on? Did she somehow marry two men? Timothy Sullivan AND Timothy O’Hare? Very curious.

Armed with the new name Timothy O’Hare, I tried some further searches, hoping to find the burial for Tim. But then I found this baptism record which further confounded me.

This certainly appears to be my great-uncle William. The names of the parents match the marriage record I found and the date of birth is consistent with the date of birth on the first baptism record. But why was he baptized as William Cecil Sullivan in an Anglican ceremony on 24 November 1895 and then as William Timothy O’Hare in a Catholic ceremony on 10 February 1896?

It appears that Timothy and Jessie used both Sullivan and O’Hare as their surnames, one for Catholic and one for Anglican. Why? I have no idea.

But why O’Hare? What about Sullivan?

But there was no child named Mary or Jessie in the 1901 census record. What happened to her? Are there two burials? I can only find one but that makes sense. You can baptize a child twice but you cannot bury the same child twice. Mary Sullivan, daughter of Timothy Sullivan and Jessie Williams was buried at the Basilique Notre-Dame on 21 January 1901.

I’m mystified as to why the family appears as both Sullivan and O’Hare in all these records but I love a good mystery.  Any theories are most welcome. Please leave your suggestions in the comments below.