Home HOW TO Transcription What on Earth Does This Say?! 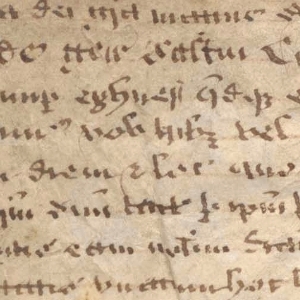 While exploring the new Discovery catalogue at  the National Archives UK, I discovered an Chancery record entry from 1711 that related to my family on the Isle of Wight. I ordered the document on CD and when it arrived, I only had time for a quick look at the images and was dismayed to find that it was going to take a lot of study to figure out what it was all about. In fact, at first glance, I was unable to determine if it was in English or Latin due to the handwriting style. Today, I’m determined to at least get some of the gist of at least one page of the record.

The catalogue reference is as follows:

William DORE was the first husband of my six times great-grandmother, Lydia OSBORNE, daughter of John and Jane OSBORNE. William DORE was most likely born in Freshwater in 1685 and was baptized there on 1 June 1685, the son of William DORE and Elizabeth BILLINGHAM of Easton.

On 25 May 1705, William purchased a property in Norton, Freshwater from Eleanor Biles of Shilling Oxford, Dorset for £10. The property was described as bordered on the east by the highway, on the west and south by the lands of the late King, now belonging to Thomas Cooke and on the north by the lands of Simon Wavill. The following year in 1706, he married Lydia OSBORNE at Gatcombe by license.

On 24 April 1713, William DORE was buried at Freshwater, leaving his wife Lydia a widow. William was 27 at the time of his death and from various parish and probate documents, it appears that William and Lydia had six children, with the youngest being born eight months after William’s death.

Examining the record, I’m still unable to decipher the brief first page but the lengthy second page, at a closer look is most assuredly English rather than Latin and the third page is not only English but in a much simpler hand.  I’ll begin with a quick transcription of this third page, without spending much time on the details.

…bly Complaineing Showeth unto  Your Lord’pp Your orator Wm Dore of the Parish of  Freshwater in the Isle of Wight in the County of Southton yeo’m that William Dore late of the said Parish of Freshwater in … said Isle of Wight and County afores’d yeo’m now dead Your orators late father being in his Lifetime seized in fee simple or some other good Estate of inheritance of and in a Messuage and several lands arrable … and Pastures Situate lying and being in the say’d Parish of Freshwater then in the inheritance or possession of the said Wm Dore and one David Urry of the Parish of Freshwater afors’d gent being at the same…seized in Fee Simple or Some other good Estate of Inheritance and possessed of and in several farms and lands arrable meadows and pastures lying and being in the same parish farms and Lands there which had been formerly by the said Urrys father or grandfather (under whom he Claymed the same) ??? of and from one. ? long since ? ? sayd David Urry and your orators sayd Late father about ??? three Yeares since for the more commonly Laying of oath others Lands together and for the better Improvem’t thereof did by ??? or ??? come to some agreement bloushing the ? going of Parte of oath others Sayd Lands (viz) the Sayd David Urry and his heirs forever was to have by virtue of such exchange part of your orators Sayd Fathers Lands which were then called and known by the names and descriptions that is to Say one Close of Land called or known by the Name of  Nowclose contayning by Estimation one acre be the same more or less ?? make lying or being in the parish of Freshwater aforesaid and one acre of land to be the same more or less lying in Hadonfield in the parish of Freshwater some time lying and being in Easton field and now o?? by the Sayd David Urry and in lieu thereof your orators sayd Father and his said heirs for over was and ? to have ? possess and enjoy part of the Sayd Lands Too fomerly p? of ? and Called ? Lands with other Lands of the Sayd Urry’s there of this number of acres and formerly called known and described as ? that is to Say one acre of Land be the same more or less Called by the Sayd David Urry by the name of Little Lyons near adjoining to the messauge and lands of your orator in the parish of Freshwater aforesaid and two acres of land being the same more or less lying in or near Easton field aforesaid and which lands were about the same time or else the ??? changes to ??? by the entry of each part the lands exchanged accordingly and your orator said ??? from the time of such entry during the forme of his life and the time of his decease which happened about the ??? day of February 1689 all along goto and enjoyed the said parish of the said Urry lands …..

Of course, I’ve still got quite a long way to go to finish just this page, never mind the other, harder one, but I now get the gist of what was going on which was my goal for today.

Apparently, the Dores and the Urrys exchanged land some generations ago. The Dore family planted an orchard and generally improved the arable land they got in the exchange. The land that the Urry family received was rich in clay which they mined and sold for the manufacture of tobacco pipes. Now that there is no further clay to be mined, the Urry family would like to trade back and repossess the arable land with the new orchard. William Dore is saying in this document something to the effect of ‘like heck you will!’

Since the document is so closely written and is on such a wide parchment, it is difficult to transcribe due to the necessity of scrolling back and forth across the screen. For the balance of the document, I’m going to try printing it on large paper to see if it is sufficiently large to read that way. There are no doubt hours of transcription left to be done on this, not to mention the revisions required to figure out the unknown or incorrect words.

Why transcribe? I have a photocopy!

Why transcribe? I have a photocopy!