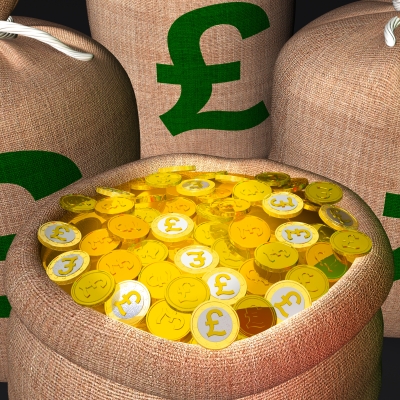 Before 15 February 1971 when the United Kingdom and Ireland decimalised their currencies, English money was counted in pounds (£), shillings (s) and pence (d).

The first attempt at decimalisation was in 1849 when the florin coin was introduced with a value of one tenth of a pound:

The New Coinage: A proclamation by the queen in Friday night’s Gazette, authorising the issue of the new silver coin, states that “every such florin or one-tenth of a pound has for the obverse our effigy, crowned, with the inscription ‘Victoria Regina,’ and the date of the year; and for the reverse, the ensigns armorial of the United Kingdom contained in four shields, crosswise, each shield surmounted by the Royal crown, with the rose in the centre, and in the compartments between the shields the national emblems of the rose, thistle, and shamrock, surrounded by the words, ‘One florin, one-tenth of a pound,’ and with a milled graining round the edge. ~The Ipswich Journal (Ipswich, England), Saturday, August 11, 1849

But it wasn’t until 1 March 1966 that the Chancellor of the Exchequer, James Callaghan, announced that the changeover date from the pound/shilling/pence would take place on Decimal Day 15 February 1971.

In April of 1968, the first new coins, the 5p and 10p began circulating and in 1969, the new seven sided 50p replaced the 10 shilling note. With both types of coin in circulation, there were obvious adjustments to be made and this is an example of a sign from the time. 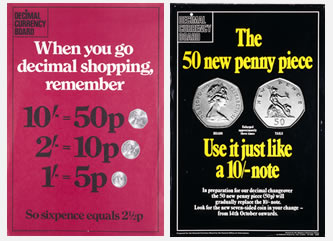 Not everyone took decimalisation well. The YouTube extract below called ‘Granny Gets the Point” shows how many of the older generation were very much against the move.

Should you have a list of various amounts of money in pounds, shillings and pence, add each type up individually and then use this calculator to re-summarise them in the correct format.

Determine the relative value of an amount from history in today’s money at MeasuringWorth.com