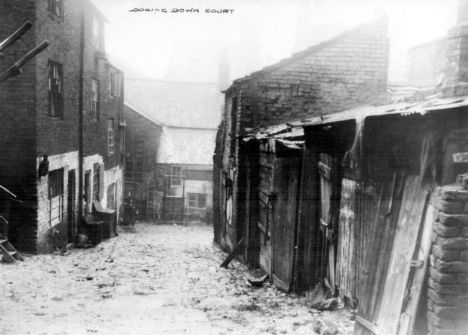 My Brown family Sheffield ancestors lived on or near Scotland street their entire lives. I stumbled upon this article in the newspaper this morning that certainly paints quite a picture of the neighbourhood. I can almost smell the smells and hear the noise as the author takes me on a tour up and down the street.

By the Impartial Observer

Miss Betsy Trotwood asked in relation to Blunderstone Rookery “Why Rookery?” but I do not remember that it is recorded that she received any reply, satisfactory or otherwise, to her query and I fancy that were the question asked “Why ‘Scotland’-street?” it would be found almost as difficult to answer. Scotland-street, however, the anything but aristocratic lane I have in my mind’s eye, has been named by somebody, and Scotland-street it must remain. It is not a nice street as such. In the first place it is humped in the middle of the back, like a dromedary; and, in the second, it possesses hardly a decent building from one end to the other. It has, too, a slatternly down-at-the-heels look at the best of times, and an all-pervading griminess which may to the natives be suggestive of money, but can only be so from the proverbial association of that indispensable commodity with its usual concomitant in this neighbourhood at least-“muck.”