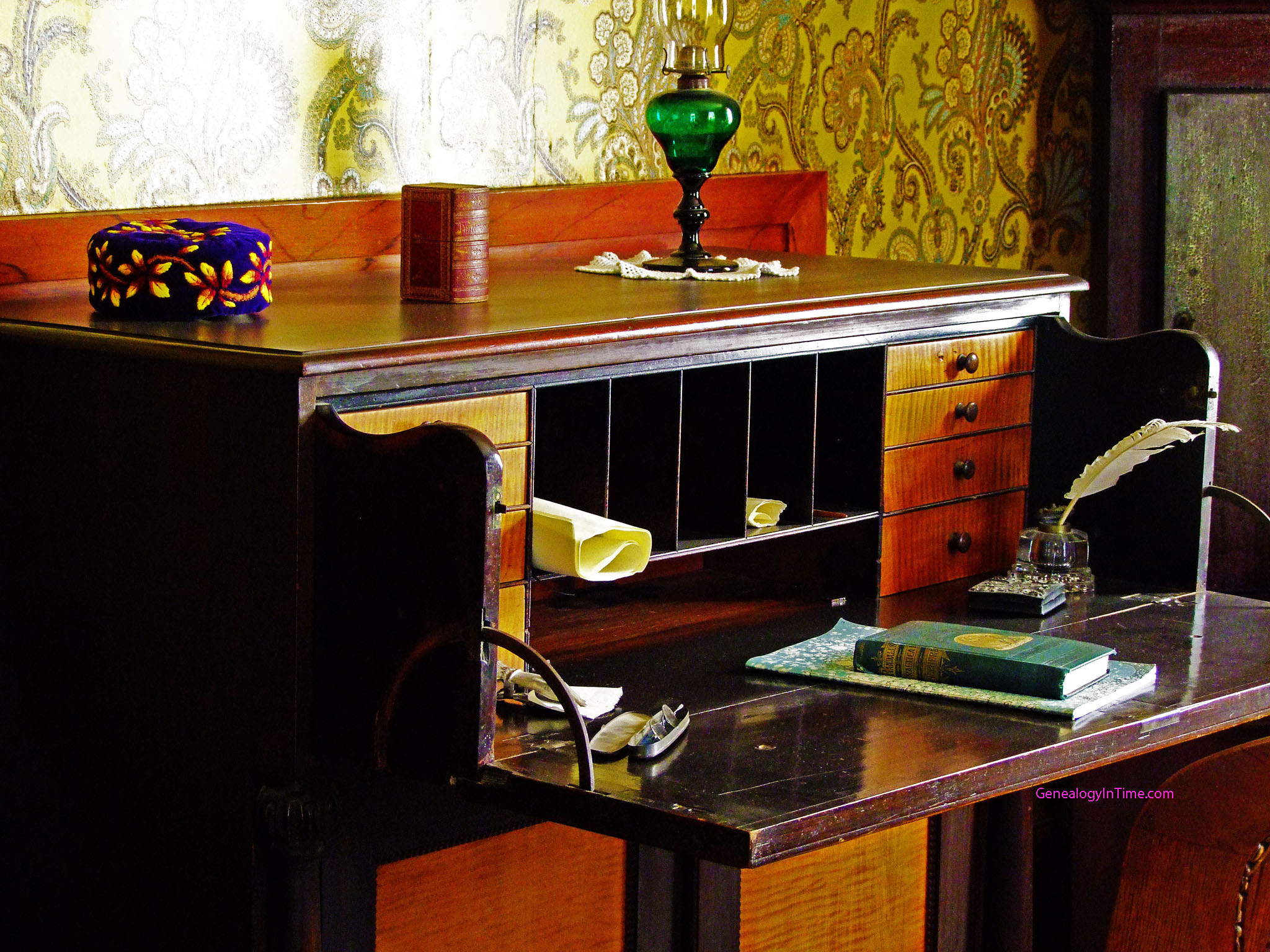 In yesterday’s post, What Could You Buy in High-street in Oxford in 1778?, Mr. Jackson had quite collection of stationery supplies for sale from shining sand to sealing wax:

Very few of my ancestors were literate, as evidenced by their scrawled marks on official documents, but some, like the Williams family from the Isle of Wight and the Bulmer family from Yorkshire signed their names in full on a number of documents so presumably were at least partially literate.

So what writing supplies would they have had stashed in their desk?

Quill pens were made primarily from goose feathers, sometimes from the rarer and more expensive swan feathers and for finer lines, from crow feathers. According to The Saturday Magazine, Volume 12, in 1832, 33,668,000 goose quills were sold in England. Most of these came from the Netherlands and Germany but many were also imported from Russia and Poland. The quills best suited for writing are the large feathers from the end of the goose wing. Each quill had to be prepared for writing by a quill-dresser. Quills were sorted into three qualities based on the length and thickness of the barrel. The largest and longest were called ‘primes’, while the next best were called ‘seconds’ and the least of which were designated ‘pinions’. The quills were then ‘clarified’ by plunging them into heated sand to crack the skin and then scraping them with a sharp edge. The heating also served to harden the barrel of the quill and make it transparent. The quills were then dipped into diluted aquafortis or nitric acid to make them split more easily. Finally the quills were cut into pens using a pen-knife and trimmed, ready for use. Most quills would last less than a week before they had to be discarded. [1]“The History of a Quill Pen.” The Saturday Magazine, January 1, 1838, 14. Ink Ink could be purchased in either liquid or in a cake, the latter of which would last longer.

Shining sand was any white sand that glittered and it was often used as a drying agent for ink. It was sprinkled on the paper to absorb any wet ink and then shaken back into it’s container. [2]‘Shift – Shop bill’, Dictionary of Traded Goods and Commodities, 1550-1820 (2007). URL: http://www.british-history.ac.uk/report.aspx?compid=58870 Date accessed: 01 September 2014.

When I was a child, I was fascinated by my grandmother’s account of how they used to seal their letters with sealing wax and under her watchful eye I experimented with melting crayons to seal letters I’d written to my friend across the street. I recall that it did not work very well, and that the crayon, although it stained the paper, did not stick in the way I had imagined it would. Sealing wax was historically made of beeswax and turpentine and sometimes shellac, resin or plaster, along with colouring materials like vermilion. The wax either be in the form of a stick, or as loose granules. It would be melted and placed on the flap of an envelope and a seal would be used to imprint the wax.

Parchment was a material made from animal skin such as calf, sheep or goat skin. The skins were limed and then scraped and then stretched to dry. After the fifteen century, parchment was slowly replaced by paper for many uses including the printing of books.