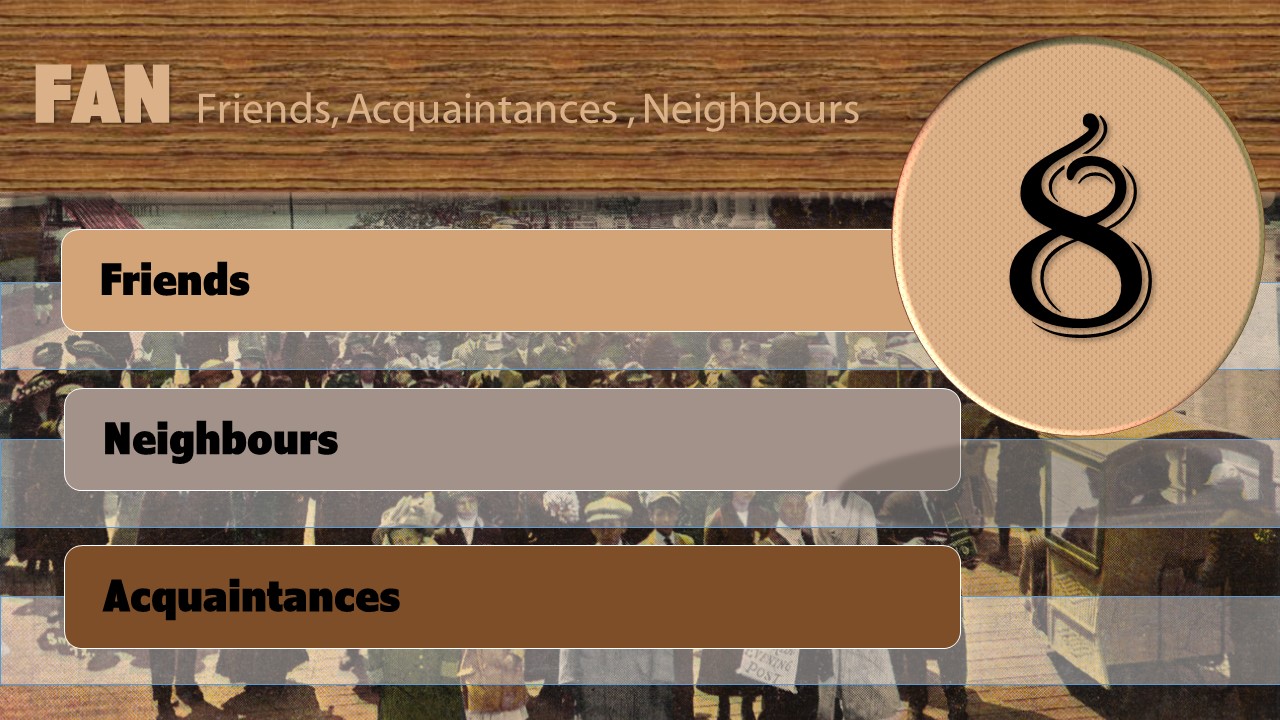 Now that we’ve defined our brick wall, created a timeline, evaluated our existing evidence, searched for new evidence,  resolved conflicts, searched for social history and searched for collateral relatives, the next step in the Busting Your Brick Wall Challenge will be to research the friends, neighbours and acquaintances.

Geography has made us neighbors. History has made us friends. Economics has made us partners, and necessity has made us allies. ~John F Kennedy
Our friends, neighbours and even our acquaintances are often very similar to us. We live in the same places, we like the same things and we live our lives in a similar fashion. These are the people, beyond our immediate family and our collateral relatives, who know us the best. Our ancestors’ lives were touched by their FAN club: their friends shared in their highest highs and their lowest lows; their neighbours stood by them when times were tough; their acquaintances touched their lives in unexpected ways. By tracing these people who our ancestors knew, we can find out more about them and perhaps make the needed connections to finally break through our brick wall.

Recommended by an Expert

The FAN principal, or cluster research, to break through brick walls is highly recommended by Elizabeth Shown Mills as a key strategy.

We always have brick walls. The most important strategy, especially in Southern research, is the FAN club principle: friends, associates and neighbors. Put your family in the context of others to work through your identity problems.Family Tree Magazine: Genealogy Insider: Five Questions With Elizabeth Shown Mills 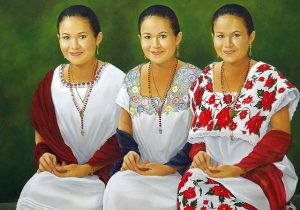 Those of us with common surnames such as Smith, Jones, Brown, Walker, Taylor and so on, often find ourselves with far too many candidates for the ancestor we’re searching for.

Even with less common surnames, our ancestors often followed naming traditions such as that of naming the oldest child after a grandparent, resulting in five men named “Richard Wearne” or a half dozen women named “Sarah Hilliers”, all related, all of similar ages and all living in the same place.

How are we to sort them all out?

Spending hours, days or even weeks researching the people in your ancestor’s life might seem like time that could be better spent, but nothing could be further from the truth. Although it might seem like the long way around, sometimes these people will lead us back to our ancestor in surprising ways.

On 26 July 1876, my great-grandparents, William and Emily Brown, had their oldest two sons, Joseph and Arthur, baptized at St. Philips Church in Sheffield. On the same day, George and Mary Draycott had their two oldest sons, Arthur and Frank, baptized in the same church. What did these two events have in common in addition to the date? Both couples lived at Court 2, Robert Street in Sheffield. Clearly the Draycotts and Browns were close neighbours and I should do more research on the Draycott family to see how long the friendship goes back and to see if their lives intersect at other places.

When my third great-grandmother, Rebecca Storey, died on 29 September 1867 at the age of 79, I found that the death certificate mentioned ‘Mary Ann Perkins present at the death 20 Pier Street Ryde’. Since Rebecca died while living in the home of her widowed daughter Caroline Leek, I wondered who Mary Ann Perkins was and why she had been present at the death. The name sounded familiar though and a careful search showed that at the time of the 1851 census when the widowed Rebecca was 62 years old and running a green grocery on Monckton Street, her neighbour was none other than Marianne Perkins, also a widow, who ran a butcher shop. Clearly the two women had something in common and must have become fast friends. Had I been unsure about whether I had the correct death for Rebecca Storey, finding Marianne Perkins’ name on the death certificate would have helped me to confirm it.

For many years, I searched for the parents of my fifth great-grandfather, William Bulmer. When he married Mary Rudd in 1773 in Bolton-on-Swale, the marriage record said that William Bulmer was ‘of the parish of Langton but I could find no record of his birth or baptism. I did not know who his parents were. It was not until much, much later that I found a land deed that mentioned William’s maternal grandfather, John Harker when I was finally able to put it all together and move back several more generations. Had I paid more attention to the records I already had, I would have seen that when William Bulmer purchased Streetlam farm in 1787, the transfer of the deed was witnessed by William Harker of Langton and I might have made the connection much sooner. I’m still not sure where William Harker fits into the family but it seems quite likely that he wasn’t just a witness but was probably family. Make sure you research the witnesses of any documents that you find. Chances are, the witnesses were close to the person featured in the document.

Researching Friends, Neighbours and Acquaintances on My Brick Wall

I have not yet thoroughly researched the FAN club for my brick wall Brown family but there are many people lurking on the periphery of George and Ann Brown’s lives. It could be that one of them holds the key to the mystery. If this step leads me closer to breaking through my brick wall, I will come back and update this post.

Brick Wall Challenge
Write a post about researching your ancestor’s friends, neighbours and acquaintances and share a link in the comments below.