Home HOW TO DNA Surprise! My Ancestry DNA Results

Only days after the Ancestry Autosomal DNA test finally became available in Canada, I ordered my kit. Although I tested with FamilyTree DNA some years ago, I was curious to see what matches I might find on Ancestry. One of the challenges I’ve found with FTDNA is that people submit their DNA for testing and then don’t post any details of their family tree. Worse yet, they don’t respond to emails about matches. I mean what exactly is the point of having your DNA tested if you are not interested in possible matches??? I mean, come on people, we all have DNA. Were you just testing to make sure you were not an alien?

So I’ve been patiently waiting for my Ancestry DNA results and was actually wondering just yesterday how much longer it would be before my results were ready. Then this morning, when I was working on a PowerPoint for a presentation I will be doing in September for new genealogists, I pulled up the Ancestry website to take a screenshot and happened to notice a message waiting. The message was from someone in England who wrote me to say that I had originally shown as a 4th-6th cousin match with him but then had dropped to a 5th to 8th cousin match.

I stared at the message in confusion, wondering what he could be on about and then realised that if he could see my DNA results, perhaps I should have a look myself. And low and behold, there they were! Apparently have been for quite a while since this chap’s message was dated 10 days ago! Thanks for letting me know, Ancestry!

The first thing I saw was the Ethnicity Estimate and I was a little surprised to see that in addition to Great Britain at 89%, I also showed 4% Finland/Northwest Russia, 3% Europe West and 3 other regions. 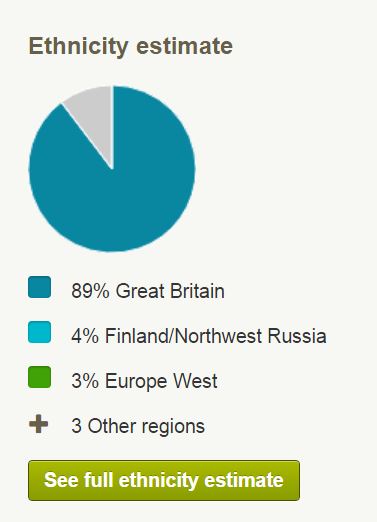 Fascinating for someone who was sure that ALL of their DNA was 98.4% British with the remaining 1.6% being Irish. Of course I clicked to see the full estimate. 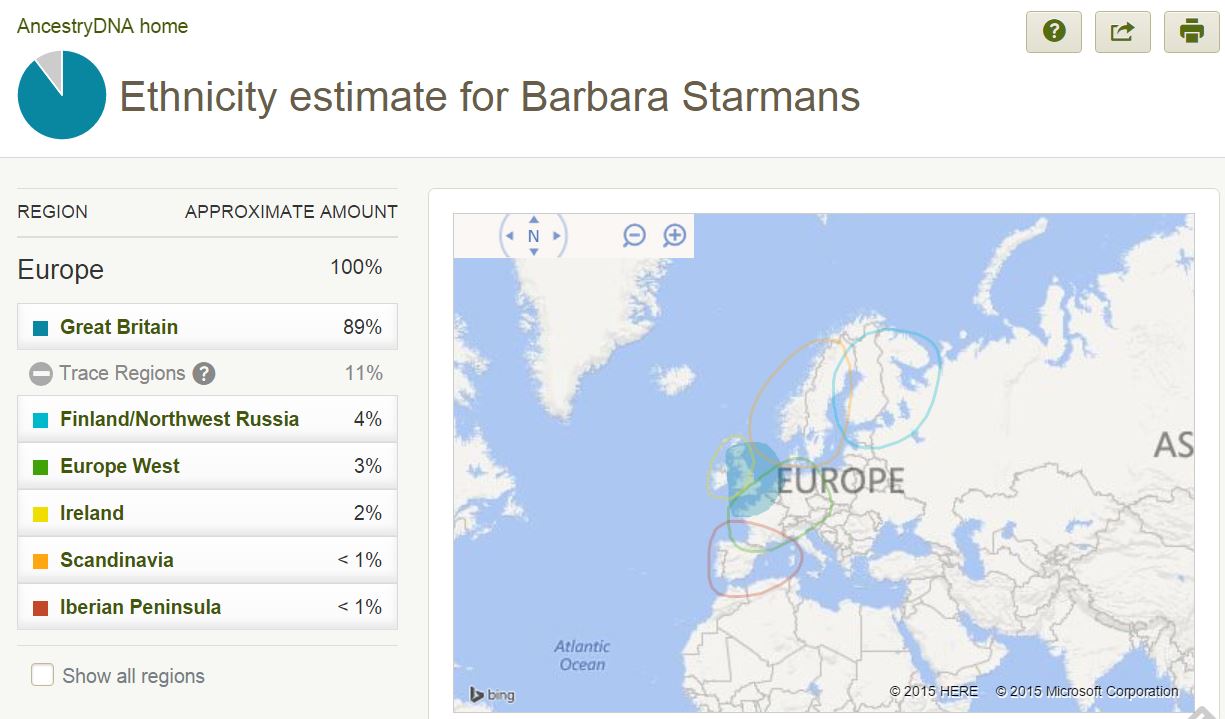 Well, there is my 2% Irish from my 3X great-grandmother but who would have suspected the 4% Finland/Northwest Russia, the Western Europe or the tiniest bit of Scandinavia and Iberian Peninsula? I’m intrigued by the 9% that I was previously unaware of and wonder how far back it goes. Certainly beyond my documented roots at least.

For some reason, I’ve always kept my Ancestry Tree privacy settings as private. I’m not really sure why when my family tree is all over the internet publicly, including on Out of My Tree Genealogy as well as on Family Search, My Heritage, Find My Past, and so on so I’ve changed it to public as recommended so that any new cousins who are DNA matches can see it.

Now for the whole point of the DNA test. Do I have any matches?

According to the summary, I have eight 4th cousin matches or closer and when I click view all, I see that besides these eight (which are actually 4th to 6th cousin matches), there are 46 matches in total with the rest showing as 5th-8th cousins.

OK, now to do some exploring!

I’ve chosen the two person match with 2285 people in their tree to start. When I click on ‘View Match’, I’m taken to the match’s screen where I see that he too is from Great Britain, Ireland, Scandinavia with traces of Iberian Peninsula and Asia Central. I can also see seven full generations of his direct ancestry but after a quick scroll, nothing leaps off the screen at me. On the left hand side of the screen is a list of ancestor surnames that appear in both of our trees. There are nine of them, however they include Brown, Smith, Williams, Marshall and Taylor and I think I would be hard pressed to find a British tree of 2800 people where these names did not appear! The other common surnames are Griffin, Hughes, Ellis and Hudson, not exactly unusual names either!

The Brown name in my match’s tree seems to be from Bethnal Green, Middlesex, a long way from my Sheffield Browns. Gave me a chuckle though to see that she was married to a man named Henry Orange. Since I have Whites and Greens in my Brown line, maybe there is something that attracts colours?

The Griffin name in my match’s tree was from Devon while my Griffin is from the Isle of Wight. At least they are in the same end of the country.

The Hughes name is from Buckinghamshire while mine is from Shropshire.

The Smith name is also from Buckinghamshire while mine is from Tankersley, Yorkshire.

The Williams name is from Cornwall going back to the 1750s, while my Williams family is firmly rooted on the Isle of Wight back to 1687.

The Ellis name is from Kent. Mine are from Yorkshire.

The Hudson name is from Gloucestershire. Mine are from Yorkshire.

The Marshall name is from Cornwall. Mine, of course, are from Yorkshire.

They Taylor names are from Devon, Yorkshire, and Middlesex while mine are from Leicestershire.

Looking at the match with the 908 person tree, I find no common surnames so not much chance of finding our connection there. This person’s ethnicity is shown as being from Scandinavia, Europe West, Great Britain, Finland/Northwest Russia with hints of Europe East, Iberian Peninsula, Ireland.

Looking at the last match(es) with the family tree of 241 people, again there are no common surnames and only three ancestors even showing in England. Not much hope here either.

In addition to Surname matches, there is also a ‘Map and Locations’ tab when exploring DNA matches. The following are some of the shared birth locations between my tree and the one in Match #1/2 above. It seems most likely that our match is in the Yorkshire Dales region. I have some newly discovered ancestors that don’t seem to be appearing here. Perhaps I need to refresh my family tree on Ancestry. 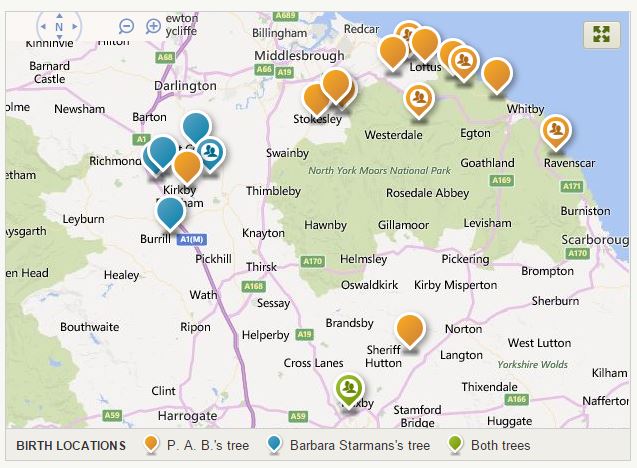 Well, there you have it. A little disappointing, however Ancestry testing has only been offered in the UK for a short time as well so there will undoubtedly be more matches over time. I see in the ‘Settings’ section in my DNA page that there is an option to download my raw DNA data. Stay tuned for another post about checking that out. I’m wondering if my raw Ancestry DNA results might differ from my FTDNA results in any way.

Know Your Genome at DNA Land