Home REVIEWS Software Reviews Put This Post in Your Pocket! 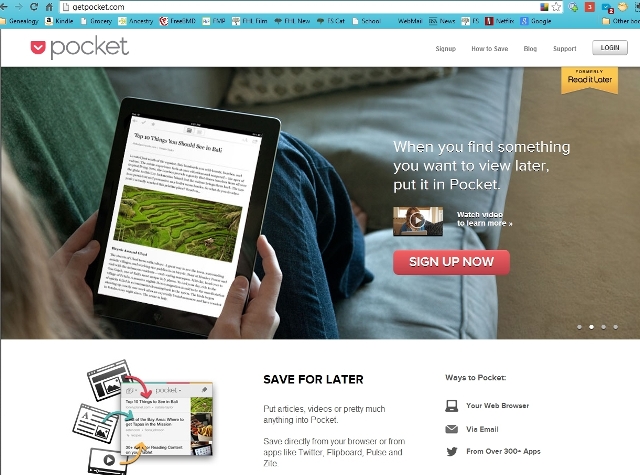 I read.  I read a lot!  I try to keep up with what is going on in world news and particularly in genealogy, technology and the freelance writing world but some days, I just suffer from information overload. I find an interesting article, crammed full of information and I want to remember it, and read it later. In the past, I’ve used IFTTT.com to connect my Google Reader account to my Evernote account. Whenever I marked a blog post as a favourite in Google Reader, it was automatically added as a note in Evernote in my “Read it Later” notebook. But Google is discontinuing their Google reader service on July 1st so I need a new plan.

I’ve known for some time now that the writing was on the wall for the demise of Google Reader so I’ve been trying out new ways of subscribing to and reading blog posts for a while now. I’ve finally settled on Feedly as my RSS reader of choice on both my desktop and on both my Android devices. It has a “Saved For Later” feature of it’s own, but that is limited to articles that I find in Feedly AND it requires me to be online in order to access them. Today, I decided to try out Pocket, formerly known as “Read It Later”.

Signing up for a Pocket account was simple and straight forward at getpocket.com. I entered my email address, a username and a password. I received an email to confirm my email address and my account was created. My account is now accessible on my browser whether I’m using Chrome, Firefox, Safari or Opera. It is even accessible in Internet Explorer if I select “Use the Old Version of Pocket” which is handy because many corporate users are restricted to only using Internet Explorer in the office.  There is an Android app, an IOS app and even Windows Mobile, WebOS, s60 and Blackberry apps. Pocket also integrates with over 300 other apps including Twitter, News Apps like Flipboard, Google Currents and Pulse.

Once my Pocket account was set up, I added Pocket to my Chrome browser on my desktop so that I could easily add web pages to my Pocket, in addition to adding them from directly from Feedly. In my Feedly account, I set up Pocket by adding my username and password in the advanced settings. Now, when I’m reading an article in Feedly, the Pocket icon shows at the top of the screen and adding it to my pocket is as simple as tapping the icon.

In my IFTTT.com account, I authorized my Pocket account and created a new recipe that will automatically add any Pocket articles I mark as favorites in Pocket to my Evernote “IFTTT Pocket” notebook for long term saving. I even added a Pocket button to the bottom of my blog posts so feel free to put this post in your pocket and read it later!