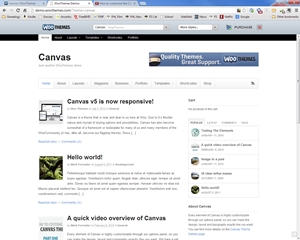 It’s only been a few months since I finally got around to moving the Out of My Tree Genealogy Blog from WordPress.com onto my own domain but even though hosting my own blog has given me more options, I’ve been frustrated by the lack of choices in the standard themes on WordPress. The more I played around with things, the more I found I was enjoying learning about WordPress and I decided to sign up for WordPress Boot camp with LearnWebDevelopment. Although the boot camp doesn’t start for another 2 weeks, I was able to download some of the tutorials ahead of time and from them, I learned about Woo Themes.

I was a little skeptical about purchasing a theme at first but after I downloaded and experimented with one of Woo’ free themes, I was very impressed.  I still wasn’t totally convinced and did some research on many of the other WordPress theme providers online. After comparing the various themes and pricing plans and licensing agreements, I decided to purchase Woo’s flagship theme called Canvas. Although some other vendors like ThemeForest sell customizable themes for a little less, their licensing agreement restricts the purchaser to only using the theme on one domain. Woo Themes standard agreement allows you to use the theme on unlimited domains – a decided advantage since I have two domains!

Canvas is one of the most versatile themes I’ve ever worked with. There are so many customizable options that I’ve only just scratched the surface of what I can do with it. To begin, I installed Canvas on Out of My Tree Genealogy and then tried to make the pages and blog look much like they did before. My plan is to make changes slowly as I learn new things (remember, boot camp hasn’t started yet!).

Must Have WordPress Plugins