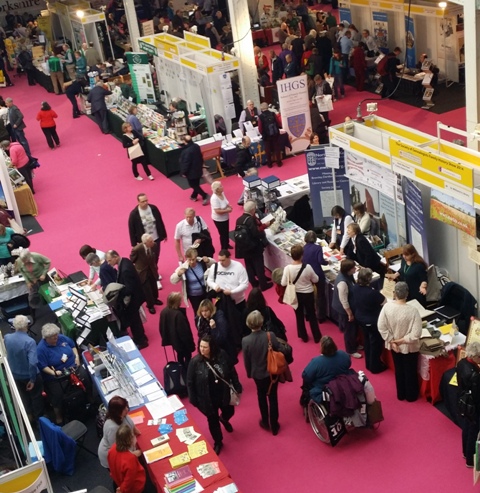 I set off this morning on the tube and found my way without too much difficulty. My phone was nice enough to navigate me from the tube station to the Olympia, although from the strange looks I got on the street when I asked S-voice to navigate me to the post code, perhaps it is not common in London to speak to your phone? But then I suppose at home, I’m normally in a car when I ask for directions so no one hears me. Maybe it is odd.

I had mis-read the opening time and was a little early but there was already a hardy line of genealogists waiting to get into the show. When the doors opened, I should have headed upstairs to the lecture tickets but found myself drawn into the exhibit hall instead. I spent the next few hours wandering around and trying very hard not to buy anything heavy like books although I desperately wanted to. There were many family history societies represented and they all had tantalizing local materials for sale. There were also several book sellers including Pen and Sword and Family History Bookshop so the temptation was high. I did pick up a handy BMD calculator wheel that figures out a birth year when you dial an ancestor’s age on one wheel and his or her age on the other. It should save me from those nasty arithmetic errors when sorting out census records.

I was able to pick up a copy of the latest Discover Your Ancestors book-e-zine which is not even on the shelves yet. I can hardly wait to give it a read. It features wartime experiences, immigration stories, and tons of social history articles. And now for a self-plug: Look for my article “Married to the Army” on page 142.

I also stopped by the Family Tree Magazine booth and managed to catch editor Helen Tovey, for whom I regularly write. It was great to finally meet her in person after so many emails back and forth. When I stopped by WH Smith in Victoria station yesterday, I found their February issue on the shelf with my article on Dade style registers. If you have any Yorkshire ancestors, you’ll want to read that too!

Finally hunger dragged me away from the exhibit hall and after a quick lunch, I went in search of the lecture tickets and managed to put together my afternoon line up. I began with a talk by Sarah Paterson called What Great Grandma Did in the First World War. She talked about the Imperial War Museum’s Women’s Work Collection. The London IWM is currently closed but will be reopening in July with a First World War Exhibit that will “include a recreated trench complete with a soundscape that will evoke what daily life was like for the troops”. I hope I get a chance to see that on my next trip to London.

Next up was Alec Tritton’s talk on Research before 1837 – What’s in the Parish Chest. The talk was fantastic and I wished that he had been able to speak for far longer. It was clear that he had a wealth of knowledge on the subject and I learned a lot about the various changes to record requirements introduced between the 1500’s and 1837 and their effects on the population.

Finally, I caught the tale end of John Rowland’s talk about Overcoming Problems with Surnames in Wales. John has done a ton of research on naming patterns in Wales and his talk was fascinating, even though, so far as I know, I have no Welsh ancestors. I will have to look for someone who has so I can borrow their ancestors for a while!

I’ve learned from this morning’s lack of planning that it is better to head up and snag tickets for the talks I’m interested in and then plan my wanderings around them so that is the plan for tomorrow.

Tuesday on the Isle of Wight