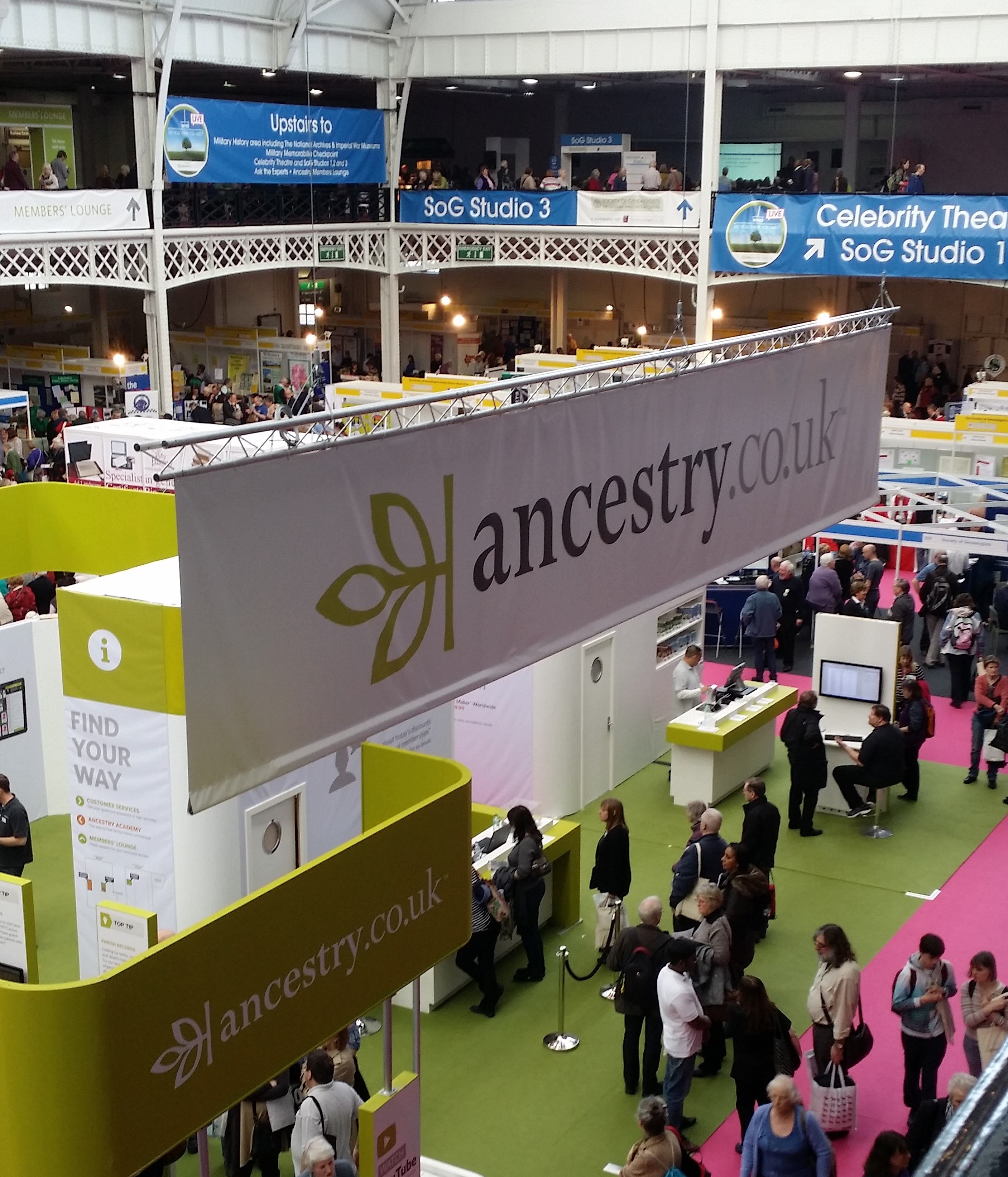 Since not lugging my backpack around was so much easier, I again opted for a fully loaded handbag and one of the plastic bags I’d scored at the show. As I transferred my ticket into my handbag, I realised that it was worse than I thought the prior day. I’d used my Friday ticket to attend the show on Thursday, and had only my Thursday ticket left to retrieve my Saturday ticket with. Clearly, I should have paid more attention to the dates on the tickets! Luckily, the staff remembered me from the prior days and let me in anyway. Thank you!

Again, I headed upstairs for the day’s lecture tickets and was disappointed to find that my choice for the first lecture, Discovering the Lives and Experiences of our Ancestors by Julian Pooley, was already fully booked, since I was again getting a late start. However, I made a last minute substitute and this was my lineup:

Although none of my immediate ancestors were in England at the time of WW1 or WW2, I chose this lecture because I had already heard a previous lecture with Sarah Paterson and I was not disappointed. I was particularly interested in a project by the Red Cross to digitise records of volunteers for WW1 that is scheduled to come on line in August of 2014.

This talk was a fascinating glimpse into correspondence between 1834 and 1871 that was sent mostly by workhouse inmates to first the Poor Law Commission, then the Poor Law Board and finally the Poor Law Department that have been collected in the MH series of records at the National Archives. At the end of the lecture, I picked up the booklet by the speakers, “Living the Poor Life” and look forward to giving it a thorough read through.

Wills: Not Just a Source for Our Better-off Ancestors! with Celia Heritage

This was an inspiring lecture. Although I have located and obtained copies of many of my ancestor’s wills, some of the examples of rich detail in collateral ancestor’s wills that Celia spoke about has peaked my interest in doing a new search for the wills of brothers and sisters and aunts and uncles of my ancestors. There may be fascinating stories waiting for me there.

Putting Your Ancestors in the Place; Sources for Reconstructing 19th Century Communities with Dr. Janet Few

I was quite disappointed that the lecture times overlapped so that I missed the beginning of this lecture since the little I did see of it was very interesting. I would love to do a one place study on one of my ancestor’s villages and my biggest challenge will be choosing which one! I’m hoping to find more information on Janet’s blog, The History Interpreter.

I confess that I chose this lecture mostly because it was given by Audrey Collins and she is a brilliant speaker, no matter what the subject natter is. It was an excellent choice because I very much enjoyed the talk, despite how tired I was after a three day conference. I’m now playing with some ideas for an article about War and the Home Front.

The WDYTYA conference was very different from the conferences I have been to before although it would seem that climbing up and down stairs is a universal experience! Unlike other conferences, the exhibit hall was all about the UK and so there was a great deal for me to explore that was relevant to my own family history. Lectures were more about history and records and less about methodology and technology. All in all, it was a great conference and I learned much more than I can even remember just now. I’m extremely grateful for Evernote notes and photo-notes on my Note 3 phone and I plan to go through all the notes I created during the lectures, organising and tagging them for future reference as well as trying to decipher the dozens of cryptic notes I made about future article ideas.