I just received the two marriage certificates for William Bond and Jessie Williams and to my great surprise, they are both for my William and my Jessie!

The first marriage takes place on the Isle of Wight in the Methodist church.  William ‘says’ he is a plumber and glazier which is what he was *before* he enlisted in the Royal Artillery.   Witnesses are F Douglas and Jane Rackett. 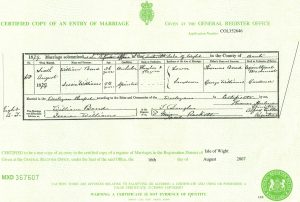 The second marriage is the one I already knew about from the St. Mary’s parish registers in Portsea, Hampshire on the mainland.  On this certificate, William ‘says’ he is a Bombadier with the RA.  Witnesses this time are family: Jessie’s father George and her sister Laura Jane. 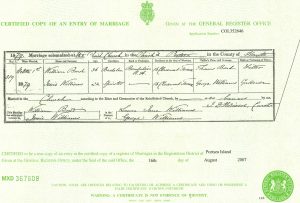 I can’t help but wonder what the story is behind all this?  Perhaps Jessie’s family objected to them being married in a non-conformist church?  I wonder if Jessie knew she was marrying a military man at the time of the first wedding?