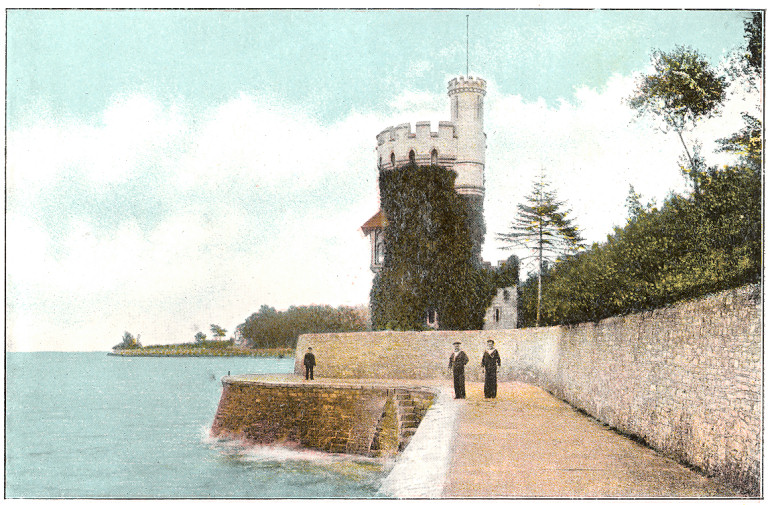 Although Jessie was only twenty one to William’s thirty six, they had no choice but to marry with the baby on the way.  But there was a problem.  His pay book clearly stated:

A soldier is not to marry without a written sanction, obtained from his Commanding Officer. Should he marry without this sanction, his Wife will not be allowed in Barracks, nor to follow the Regiment, nor will she participate in the indulgences granted to the Wives of other Soldiers.William Bond's Pay Book

William probably applied to his commanding officer for the required permission to marry and was refused.  Having no other choice, William and Jessie quietly applied for a marriage license and on 6 August 1879, with Jessie’s belly swollen with child, they furtively spoke their vows at the Wesleyan Chapel.  On the marriage registration, William gave his address as Lower Sandown instead of the barracks and said his occupation was that of a plumber and glazier.  It was done.  Their child would not be born out of wedlock.

Presumably, William continued to petition for official permission to marry and was finally able to obtain sanction from his commanding officer in early September.  No longer needing to be clandestine about their plans, William and Jessie arranged for banns to be called at St. Mary’s church in Portsea on the mainland.  On the first day of October 1879, they married again, this time with Jessie’s father George and her sister Laura Jane standing as witnesses.   On their second marriage registration, William gave his true occupation of Bombardier with the Royal Artillery.

The official wedding was barely in time. Three short days after her Portsea wedding, Jessie gave birth to a son on 4 October 1879 at her parent’s home on St. John’s Road.   They named him William George, probably William after his father and George after Jessie’s father.

Then, only six weeks after the wedding, on 11 December 1879, William received new orders.  His regiment was being sent to Delhi in the north of India.   On the strength of their “official marriage” Jessie and baby William were allowed to accompany him.

Not long after their arrival in Delhi, William George was baptised on 15 February 1880 at St. James Church.   The family must have tried to settle in to life in Delhi but probably found everything about the place was strange and unfamiliar.  As the year wore on, the weather became warmer and even warmer and then hot, hotter than William and Jessie had ever known it could be.  Then in June or July the monsoons would have come, and the rains would have brought some relief from the heat.  During July and August it would have seemed as though there would be no end to the rain and the mud but as October began the rains finally stopped and the ground began to dry.   But it was too late.  Poor baby William George had failed to thrive in the extreme climate and slowly wasted away from marasmus, a severe malnutrition.   He succumbed on 6 November 1880 and was buried the same day at St. James Church.

Sick at heart at the loss of their young son, William probably requested that they be sent home to England.  They left India on 24 March 1881 and arrived back home on 11 May 1881, a journey of forty eight days.

On 14 August 1882, Jessie gave birth to a daughter, Laura Alice, in Woolwich where they were stationed after returning to England.  The baby was probably named for Jessie’s sister Laura and William’s mother Alice.  Laura was born at the Female Hospital, just off Woolwich Common, near the Garrison.  Since hospital births were very uncommon at the time in England, the birth may have been a difficult one or Jessie may not have been well during the pregnancy.

When Laura was almost two, on the 5th of July 1884, William and Jessie had another child Thomas Henry also born in Woolwich, although this time at home instead of at the Female Hospital.  He was named for William’s father Thomas and his middle name might have echoed the name of Jessie’s uncle Henry.

On the 4th of April in 1887, a daughter, Frances Josephine was born in Slough Fort, Middlesex.  Frances was William’s maternal grandmother’s name but the origins of the name Josephine are unknown.

On 3 November 1890 another son, John Arthur, was born.  On John’s birth certificate, William’s occupation was listed as a night watchman and the address listed was 25 Maiden Lane in London. The family was trying to adjust to life away from the military but soon fell on hard times and first William entered the workhouse on 26 November 1890  and then the three older children followed on Christmas Eve.

At the time of the 1891 census in April the following year, William was ill and was a patient at the St. Georges of the East infirmary. His occupation was listed as a night porter.  It was not a good time for the family. Both four year old son Thomas and six year old daughter Frances were also patients in the infirmary.  Eight year old Laura was listed as a scholar at the Industrial School of St. George in the East.   Jessie was living in Southwark at 73 Jubilee Building with baby John Arthur who was only five months old.

After discharging himself and the children from the workhouse on 10 September 1891,  William must have grown increasingly despondent in civilian life and continued drinking heavily.  On Saturday, 26 August 1893, William was at his job as a night watchman on Duke Street in Southwark near London Bridge.   Jessie gathered up John and Frances, her two youngest children and set off from their home on Cable Street about half past one to bring him his evening meal.   When Jessie arrived at William’s place of work, she found him lying on the floor in an insensible condition. She managed to get him into a cart, perhaps with some assistance from someone on the street and rushed him to the nearby Guy’s Hospital.  Doctor Francis Jordon Coleman was on duty there and saw William at about ten past two.  William was blue in the face and close to death.  Shortly after he arrived at the hospital, William breathed his last.   Jessie was a widow.

On 29 August, an inquest was held into William’s death in the parish of St. Saviours, Southwark.  Samuel Frederick Langham Esquire, the coroner, along with eleven other jurors heard testimony from several witnesses.  First to be heard was Fred Sreuett from St. Saviour’s Church whose statement from the previous day was read.  He related that when Jessie went to bring William’s dinner, she had been told that he was “the worse for drink” and that she had found him “in a fit”.  He told how William had been taken to Guy’s Hospital in a cart and that he had been pronounced dead by the surgeon at about 2 p.m.  Mr. Sreuett also shared that William had “given way to drink for some years”.

Next to testify was Jessie herself.  She related how she had arrived at William’s place of employment to find him dying.  She told how he had been drinking heavily all the previous week and that he had been a heavy drinker all his life.  Jessie told how William carried a vial of smelling salts in his blazer from his soldiering days and that after his death, when his affects were returned to her, she had discovered that the quart bottle was only three parts full.

William Richley, the owner of the business for which William worked, testified that William had been “full of drink” all day Friday, the day prior to his death.

Francis Coleman, the physician who had examined William at the hospital and who had subsequently preformed an autopsy, testified that William had died of corrosive poisoning and must have ingested the poison about two hours prior to his death.

After careful deliberation, the jury concluded that William’s death was an accident and that in his drunken state, he had accidentally consumed the corrosive poison.

Jessie must have been relieved that the inquest was over and that William could finally be laid to rest but perhaps she wondered, at least a little, if it was truly an accident that William, as unhappy as he had been, had drank the corrosive salts.