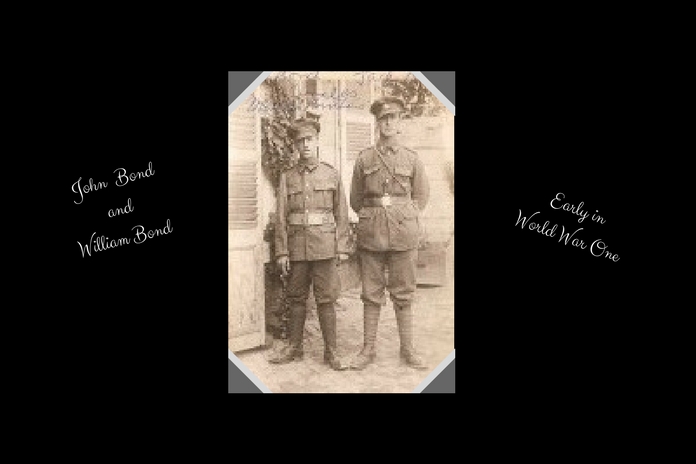 William Bond Jr enlisted in the Canadian Expeditionary Force on 10 February 1916.  According to his attestation papers, he was born 22 November 1894 in Montreal which would make him 20 years old.  His occupation at the time of enlistment was electrician and he was residing with his mother at 121 Dalhousie Street, Montreal.  William said that he had served in the 55th Irish Rangers for 5 months and the Army Service Militia for 4 months.  He was described as being 5 feet, 5 inches tall with a fair complexion, blue eyes and light hair.  He had a tattoo of a bird on his right forearm and an appendicitis scar on his right side.  It was noted that his appendix had been removed during his childhood in 1906 and that he had never seen a dentist.  He had been vaccinated once as a child and had a vaccination mark on his left arm.  He was joined the 148th Battalion on enlistment but was transferred to the 24th Battalion.

William’s brother, John Arthur Bond, who enlisted in Toronto on 26th of January 1916, gave their mother’s name as Mrs. Jessie Williams.  Both John and William indicated that they were their mother’s “sole means of support” and that they were her only son.  The reason for these contradictory names for Jessie and the indication that each are her “only son” are probably explained by one of the forms included in William’s package.  One of the questions on this form states:  “If you have a wife or children or a widowed mother who depends on you as her sole support, have you applied to the Paymaster of your unit for Separation Allowance?”  William indicated that he had applied.  John’s package also contains records of the payment of a separation allowance to Jessie.

On 24 Feb 1916, William forfeited 4 days pay and received 28 days detention for being absent without leave.

On 6 March 1916, not long after enlisting, William developed tonsillitis and was admitted to the Royal Victoria Hospital in Montreal.  He had a tonsillectomy and was discharged after nineteen days on 25 March 1916.

William left Halifax on 27 sept 1916 aboard the SS Laconia and arrived in England on 6 October 1916 where he was transferred to the 24th Battalion overseas.

He was then wounded at Passchendalle on 10 November 1917 from shrapnel in his right forearm and also received a concussion.  He was admitted to the 16th field unit.

Complaining of heart problems, William underwent a medical review by the board to determine if he was fit for active duty in December 1917 and was found fit.  He was transferred to the Canadian General Labour Pool as a Reinforcement.  On the 27 December 1917, William was sentenced to 7 days Field Punishment for “when on active service absent without leave from 7 a.m. 21 Dec 1917 until apprehended at 7:30 a.m. on 24 December 1917” (about 72 hours, 20 minutes).  He forfeited 4 days pay.

On 20 December 1918, William underwent a third medical review at the Canadian General Depot in Witley to determine if he was still fit for active duty.  The review paperwork gave his birth date as 22 January 1891 which is probably a mistake.  His disability was shown as Tachycardia caused by Active Service Conditions in Belgium and originating in November 1917.  During the exam, William stated that his health prior to enlistment had been good except for measles in childhood and appendicitis when he was 7 or 8 years old which resulted in an appendectomy.  William said that he had not been ill since enlistment except for his tonsillitis resulting in a tonsillectomy in 1916.  The doctor noted that William was “slightly anaemic in appearance” and that William mentioned that he got out of breath easily and suffered from palpitations.  He said that he had pains in the region of his heart on any violent exertion.  Despite these complaints, he was again recommended fit for active duty.

William sailed home aboard the HMT Aquitania.  He embarked in Liverpool and arrived back in Halifax on 24 January 1919.  On 9 April 1919 he was again declared illegally absent and was apprehended as a deserter on 25 April 1919.  On 22 May 1919, he was again charged with desertion and received 14 days detention and forfeited 35 days pay.

William was discharged as a Private from the 148th Battalion at Montreal Quebec on 4 June 1919.

William died 24 July 1922 from tuberculosis, contracted while he was overseas.  He was buried on 26 July 1922 at Mount Royal Cemetery, Section G 941/53 in the Soldiers Cemetery in Montreal, Quebec.